Dair/Oak - Magic in the Trees

It was a no-brainer for me which tree I would choose to talk about. Actually, I take that back. As I sit here and write this another tree comes to my mind. Oh well, that tree will have to wait another day (and I won’t tell you which one it is, either!).

I am surrounded by very large Live Oak trees. I have one in my backyard. Each of my neighbors have at least one in their yard, and they are the staple of my neighborhood. These trees are very special in my area of Florida, so much so that they are given the nickname Grandfather Oaks. I can’t tell you how old they are, but I can tell you that they stand tall and proud as they surround us. 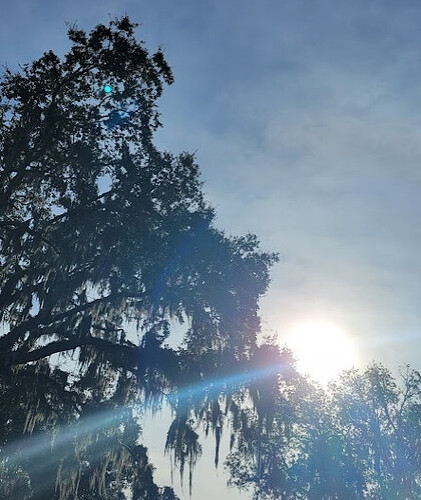 According to the University of Florida’s Gardening Solutions website (linked below), these live oak trees can grow up to 60 feet tall (18 meters) and have a branch spread of up to 100 feet (30 meters). Their branches usually grow in curves and twists, not more straight branches like you might see in other trees. They can have a six-foot (two-meter) diameter trunk of they are given space to grow that large. They are also often draped with Spanish moss, lovely little hanging things that make the tree look magical.

I know this is not a tree, but it is related to the live oaks in my area so I wanted to include some information about the Spanish moss here, too. According to the same source as above, Spanish moss isn’t a parasite as some people think. It is actually an epiphyte and gets all of its nutrients from the air and rainwater. It does no damage to the trees and actually provides protection and homes for many animals and insects.

If you know me, you would know that I would relate my studies back to Ireland because of the path I walk. The oak trees in my area, the Southern Live Oak, are not found in Ireland. Instead, the two types of oak trees I have found for Ireland are the Quercus robur (Dair ghallda or Pendunculate Oak) and the Quercus petraea (Dair ghaelach or the Sessile Oak).

According to The Tree Council of Ireland, Pendunculate Oak are considered to be native to Ireland and are genearlly associated with heavy lowland soils. On the other hand, the Sessile Oak is considered the traditional Irish oak tree. It is the main species found in Ireland’s woodlands and is more commonly found on poor acid soils.

In thinking about what species of oak tree the Tuatha de would have seen, I am going to go with these two. This is also because Lora O’Brien (linked below) has it written that among the 28 Principal Irish Trees, the Dair/Oak was among the most valuable and noble. They are called airig fedo – ‘lords of the wood’. Trees were so important to the ancient Irish that there was an entire legal system dedicated to them! It’s called Brehon Law and I will link a source below.

Let’s take for an example the mighty Oak. A mature Irish Oak (Quercus Robur) can live for more than 500 years, and grow 130ft tall. One of these trees supports over 250 species of insect, and over 300 different types of lichen, which form the food chain for a multitude of birds. Oaks grow acorns, a feast for many wild creatures, who can also make a home in the tree – whether they’re nesting in branches or curling up at the roots. Humans also benefit greatly from each and every tree, so it’s no wonder the oak is known as the ‘king of the woods’. In Irish it’s called dair, and shares a root with the word for magic and druid – draoí. The practical value of the oak in Brehon Law is said to be “its acorns and its use for woodwork”; the acorn crop was particularly useful for fattening pigs, while oak-timber is the finest for fences and buildings. Lora O’Brien, Sacred Irish Trees

Image is my own.

Dair in the Ogham

Dair gets its own ogham fid, actually. It is the letter “D” in ogham and looks like this.

Screenshot from the digital version of Weaving Word Wisdom

I won’t get too much into the meaning of the ogham fid dair because I will cover it in its own post eventually. However, I want to include a few points here from the book Weaving Word Wisdom by Erynn Rowan Laurie regarding the value and purpose of Oak.

Oak is valued for many purposes and used for anything requiring strength, where weight is not an issue. Doors have often been made of oak to keep out intruders. The tree itself is long-lived and working with its wood takes effort, but what is made from it is frequently exquisite in craftsmanship and long-lasting, for less talented woodworkers use softer woods to practice their arts, graduating to harder and more valuable woods as their skill grows. Weaving Word Wisdom

As stated above, the oak tree has long been used for matters of strength and protection. Listed here are just a few of my personal correspondences for the oak tree.

Anyway, I didn’t know I could write so much about one type of tree but here we are! I hope you learned something new today

If you read it all, congrats! I now bless you in the name of the Dair!

I have a meditation that I do & I believe she is Irish, it’s a guided meditation to meet your tree spirit ally. It’s one of my favorites & after a couple of times, I realized that the oak tree in my back yard apparently has a connection to me. (Now I want to go a step further & figure out the type of oaks in my yard. There are 5 around my house/yard.) After thinking about the last 19 years, it makes sense that there would be something from that particular tree. Now I try to do the meditation at least once a week.

These are my favorite trees, they’re just beautiful. I have Spanish moss hanging on my fence out back that I just enjoy looking at.
Thank you for all the great information!
Blessed Be,

Wow! I didn’t read this before I posted in the challenge. I have 10 Oak trees in my yard. I have lost 3 big ones in the 29 years I have lived here and each one broke my heart when it died. My favorite tree has been through hell in it’s lifetime, but she is still hanging on. I hug her all the time. I can feel her vibration, if that makes since. I think I need to start hugging my other trees so they don’t feel left out!

@Siofra I am definitely in need of connection with the oak tree in my backyard. I’ve tried but sometimes these ancient trees are stubborn

I’ll keep being friendly and keep giving offerings. Over time I’m sure they’ll come around!

@Rowan The Spanish moss took us by surprise when we moved here but it has easily become one of my favorite things!

@linda10 Oh I’m so sorry to hear that you’ve lost three trees in that amount of time! I definitely say give the other ones big hugs

Every tree in my yard are getting big hugs tomorrow!

We have moss that comes from 1 of the oaks next to my house, which was my daughter’s favorite. (She had a “face” on it with some decorations specifically made to look like the tree’s face was there. It was pretty neat). Every year on that side of the roof we get moss on both slopes. Then it just moves across the roof the longer we let it go. (I can’t get up there to sweep it off or spray anything on it to loosen it without the risk of me no longer being on the roof). I’m always drawn to look at it though & how it progresses & the shapes that it makes on the roof.

I knew you would thrive with this challenge, @MeganB- and your work did not disappoint!

Beautiful work- thank you so much for sharing!

I’m always drawn to look at it though

You know what’s absolutely funny to me? Reading this made me remember that when we first moved to Florida we went to a park with my sister. There was Spanish moss everywhere and I was absolutely enamored by it. My sister picked some up from the ground and put it in her purse and told me she’d give it to me later

I didn’t have a bag with me so she knew to grab it! Now I have it all over my yard!

Yes, absolutely! I was actually thinking about the full moon tonight and how I want to do a ritual to honor the beings that are here with me: the trees, the grasses, the tiniest bugs (except for those dang mosquitos

) and my garden. Give offerings, say thanks, etc. I might do that if it doesn’t storm again today!

I remember looking at the moon last night & hoping that I could do something outside for it, but it’s way too stormy for that unless it passes this afternoon. I should probably check the weather.

I don’t know what it is but the patches of moss that are around my house just make me want to almost watch it like it’s going to do something. I look at it & where it’s placed or if there’s more/new moss around it.

I always hated the kissing bugs in FL… I have a general distaste for mosquitoes, but those kissing bugs are worse than cicadas up here.