📿 Weekly Witchy CHALLENGE - A Healthy Dose of Stones and Crystals

Thanks that’s really helpful, I knew you’d have the answer!

That crystal ball is stunning!

Thank you! She is my favorite crystal by far!

I have a special relationship with this crystal ball.

I love it!!! All the knowledge and the eye

is awesome!! I never thought about the eye. I have a clear quartz that has an eye as well and a black obsidian that does not. Go figure, I can only work with the quartz. Also, quartz has to be my favorite, too. But anyway you have a beautiful entry! Thanks for sharing!

Thank you!!! My knowledge about crystals is somewhat limited, but when it comes to divination… that is my passion lol.

For part 1 of my entry, I made a physical healing grid for everyone here! It’s distance healing. And I love all of you and I want you to be well!!

*The crystals can be any size or shape to work!!!

I placed the black tourmaline at the feet for grounding. The petrified wood on the hands for balance. Smoky quartz on the solar plexus chakra for emotional calm. The green aventurine besides the neck area for good health, rejuvenation and success. The clear quartz point on the crown chakra for clarity and amplification. 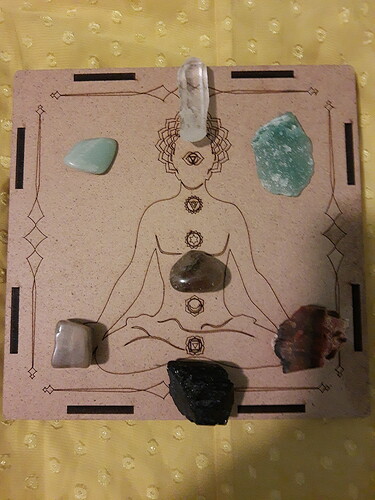 I used a yellow cloth for the Summer Solstice

You’re so sweet @christina4, thank you! For your knowledge, healing, everything!

You’ll either have an easy time of it, or feel like you have to go overboard to rock this challenge. Heh. Rock it! LOL! Good luck!

I do crystal ball scrying as well, and I have an obsidian ball as well as a selenite ball that I use.

I love that crystal ball. Is the ‘eye’ there where the light hits it oddly? Because that’s beautiful!

For part 1 of my entry, I made a physical healing grid for everyone here! It’s distance healing. And I love all of you and I want you to be well!!

It’s lovely darling! Thank you so much!

That’s amazing- thank you for sharing your lovely crystals, and also for the great info about crystal scrying @Katy_Mysticsens!

Your Selenite Crystal Ball is gorgeous- what a treasure! May it continue to serve you well

Such a lovely physical healing grid, @Christina4- thank you for sharing both your warmth and your wisdom!

Bonus points to @Amethyst for the astone ding rock puns

Bonus points to @Amethyst for the a stone ding rock puns

I’m with Francisco about salt, it’s important in so many ways, from our day to day life to the magick it promotes.

Salt is a powerful absorber of psychic energy. It doesn’t channel this energy but absorbs it and holds it instead and it is this central property which accounts for its many different uses in magic. Here is a list of magic uses for salt. The use of Salt is multifaceted.

Ordinary salt may be sprinkled across thresholds and around the perimeter of dwellings, inside and out - Salt is indeed a natural pesticide that can be used to kill ants. It absorbs psych. energy, disallowing it entry into your circle.

I always use salt in making a protective circle. It keeps out negativity and any psychic attacks.

Salt is used in making holy water. It can also be made a part of a wish ritual where in you make your wish and throw salt into a fire. (It’s much more complicated but I’m trying to keep this realistically short.)

This was my first time writing my own spell. Until now, the spells I’ve cast were the ones on this site that I’ve followed to the T or modified.

My first spell was a healing spell. Here’s what I did.

I diffused some peppermint to correspond with the First Quarter Moon in Virgo on June 16 and for my mediation before the spell work.

Clockwise, I sprinkled some oregano leaves in a circle around a candle holder for health and happiness. I then dressed and lit a blue candle with peppermint for healing and for inner peace and harmony.

I have a box of small stones that I bought at a science center a few years ago and Lapis Lazuli was among them. I read that you can use Lapis Lazuli to invoke inner peace and to protect yourself from negative influences, so I put some on altar.
I went through the pantheon of dragon gods and goddesses I have written down and chose Morthan-Dragon Goddess of the Harvest and the Mother of Dragon-kind.

Holding the largest Lapis Lazuli stone I had, I then said the prayer I wrote to Morthan for my favorite author L.J. Smith to receive an “abundance” of peace, happiness, and good health and a motherly protection from any negative energies or thoughts that might arise as she continues to recover.

I have to mention that I was unsure about casting this spell, but when the blue candle crackled a few times! I’m not sure if that was Morthan or if there was something wrong with the candle (the air wasn’t humid, I didn’t notice anything wrong with the wick, or see any air bubbles in the wax as the candle was burning). But whatever the cause, it gave me the push to start the spell!

I guess I’ll never know if L.J. Smith felt anything during or after the spell and I don’t think I’m strong enough to actually completely heal her, but overall, my first spell was a great experience that helped bring some peace to my life after a week of family drama.

By the way, here is the healing prayer to Morthan that I wrote. Feel free to use it in any of your rituals!

Prayer to Morthan For Healing

Great Dragon goddess of the harvest and mother of dragon-kind,

you who have existed since time out of mind,

you who are as gentle as a lamb and fierce as a lion,

I kneel before you and pray

Envelop [recipient’s name] in your wings

May love abound in his/her/their heart

So mote it be.

KasandraChant Witch
This spell is wonderful, may I keep it for my BOS?

Sure thing!
Feel free to follow it to a T or modify it according to your needs.

My challenge activity was creating a crystal spa experience to give my spirits a lift on Friday (Venus day -spa-like beauty ritual). 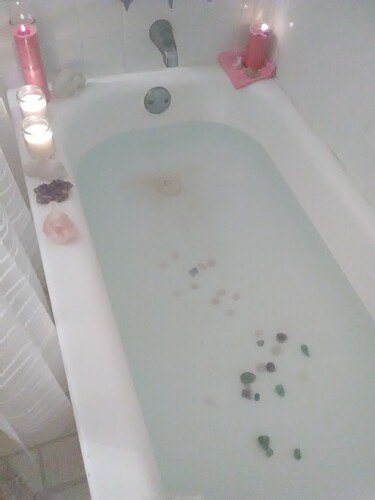 CelestialMoon,
Thanks for sharing Kyanite! I like that
Kyanite promotes good communication, and bridging the gap between different beliefs and ideas, and encourages self-expression and speaking one’s truth!
I need some of that!!!
Kassandra,

I first heard of and learned about the triple moon goddess in Spellbinder, Book 3 of Night World Series) and I wouldn’t be surprised if she practices herself. Thanks for the lovely poem too

Thanks, I will look into Night World Series and I think it’s neat she practices herself!
I just got some lapis! It’s a great stone! 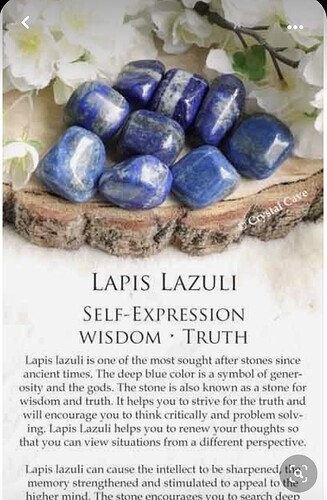 Iris - Thank you for the correspondence for the crystals for Litha! You are an inspiration to me, all the time! Thank you!

is a crystal!
Thank you for the book recommendation, I think I’ll put it on my book list to incorporate on Amazon. I am trying to use salt more in my rituals so thank you, for the crystal grids and the blueprint for crystals! I have quite a collection now.

Christina- “Fantastic” I love the creative art you created! When I get home I am going to try to create a grid! Thanks for this inspiration. I like the petrified wood, it is my favorite! And you did a great job on the drawing. I never was good at drawing people.

Mary- Hi I thought this was very interesting, can you please emphasize? I was just wondering about the citrine chip?

Ooh, that sounds as if you’ve had a lovely spa day @mary25! Way to go!

Well, i was searching online for beauty and cosmetics with crystals when i found a topcoat at Sephora that had amethysts in it. I had citrine chips so i just dropped them in the bottle of top coat i already had. It doesn’t change the nail polish except to maybe give it some energy. Now I will have happy feet

That’s awesome! I have some chips that I could do that with for my daughter! Thank you for the idea & inspiration!