From Aleister Crowley to Wicca: 4 Types of Paganism

) and I noticed many of you found that useful! So for this week’s Witchy challenge I decided to go a bit further into decyphering who he was. The Link Between Aleister Crowley and Wicca ⛤

I discovered Mr. Crowley’s work as a teenager but couldn’t really connect with him. I felt I wasn’t sure who he really was or what he believed. Was he a Pagan? a Christian? Satanist? Only recently I came upon some of his quotes which really helped me connect the dots.

This is what I learned about him reading A. Crowley’s chapter in Prof. Hutton’s book Triumph of The Moon. In summary, this is how Aleister Crowley relates to Wicca and Neopaganism.

Who was the Real Mr. Crowley? 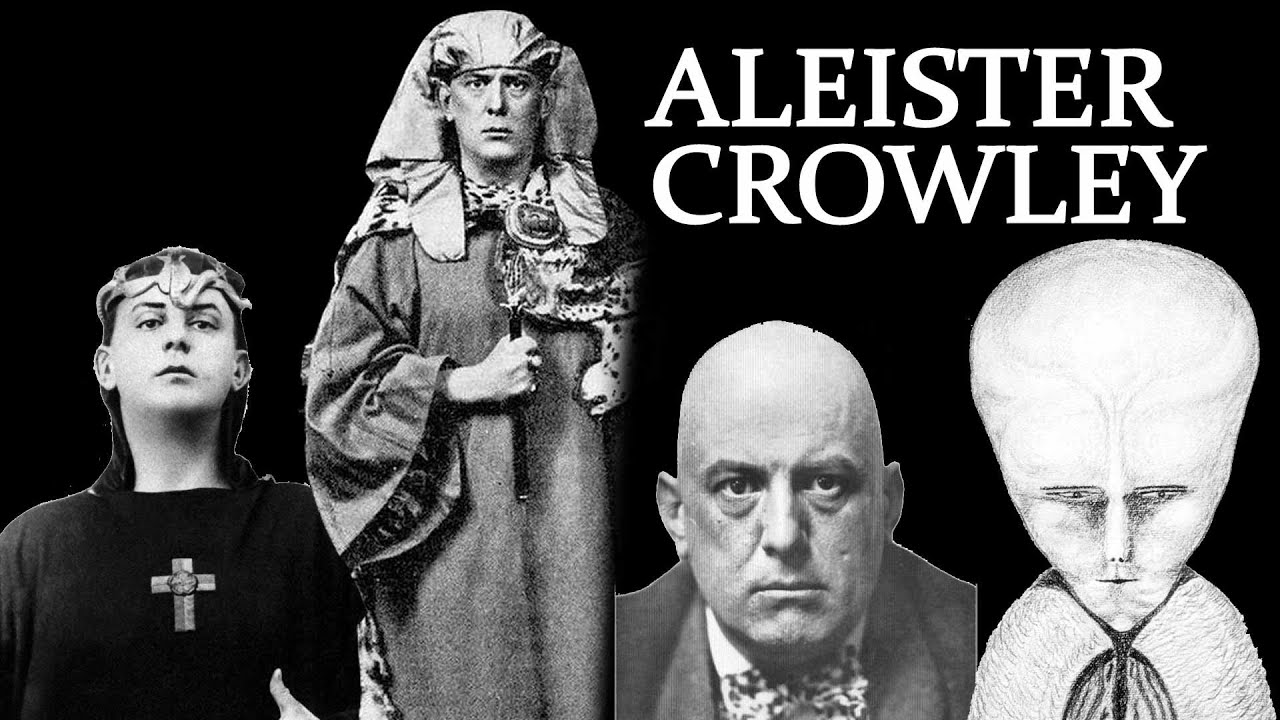 The short answer is that he had 4 personalities when it comes to his views on religions and the truth: He was a “satanist”, a “polytheist”, a “monotheist”, and a “Neopagan”. Really!

This idea of paganism as a religion of gloom and gore was used to paint Christianity as the religion of the civilized people of European cities, and was preserved well into the 20th century.

Aleister Crowley, like many pagans even today, was inspired by this idea of paganism as a dark and macabre thing. Think of the Gothic Witch in The 3 Types of Witches.

For example, In his book Moonchild, Crowley speaks of “‘the fearful deities of man’s dawn, when nature was supposed to be a personal power of cruelty, delighting in murder, rape, and pillage’ and ‘children were cast into the fire, or thrown to bears, or offered up in sacrifice on bloody altars.”

At times, Crowley called himself the Beast 666 and identified as Baphomet. His Book of Law. according to Ronald Hutton is an almost precise reversal of the morality of the New Testament. This one is connected to the interpretation of paganism towards the 19th century, when Greek and Romans became associated with magnificent art, literature and philosophy. Now Europeans were starting to see the ancient deities as interesting allegorical or mythical figures that they could use in written works, paintings and sculptures.

Aleister Crowly has a polytheist facet, especially in the “Paris working” with Victor Neuburg. These two magicians would invoke major Graeco-Roman deities, treating them essentially like spirits to be summoned and worked with. This is when he wrote the Hymn to Pan, and he famously invoked Mercury and Jupiter in a hotel room.

Crowley’s favourite pagan pantheon was the Egyptian one, and accorded his deities a special place of honour. Near the end of his life he declared that the ‘Egyptian Theogony is the noblest, the most truly magical, the most bound to me (or rather I to it) by some inmost instinct’ and that he used it ‘for all work of supreme import’ Using his own quotations, it is also possible to make the claim that he was a monotheist. His third magical personality depended on the notion that there had once existed a single great world spiritual system, based upon divine revelation, of which the main religions practised by civilized humanity during historical times all contained traces.

This idea of an eclectic, multicultural religion would become what is known as Theosophy. A system of spirituality and philosophy which blends Eastern and Western mysticism, based on a veneration of the sun. While not strictly “pagan”, it was part of an “occult revival” that took place during the late 19th century along with other groups like the Hermetic Order of the Golden Dawn.

“in the macrocosm is one sole God, the Sun”.

Another declares that ‘God in Spirit and Truth is one.’

His fourth personality matches that which later became Neopaganism.

This Modern form of paganism has its origin in Romanticism, and is a fusion of three powerful forces: admiration for ancient Greece, nostalgia for a vanished rural past, and desire for an unity between people, culture, and nature. German and English poets had been turning against Christianity, yearning for a kind of paganism which was synonym with freedom, ancient knowledge and kinship with nature.

Crowley was inspired by this movement and eventually wrote:

“The time is just ripe for a natural religion. People like rites and ceremonies, and they are tired of hypothetical gods. Insist on the real benefits of the sun, the Mother-Force, the Father-Force and so on; and show that by celebrating these benefits worthily the worshippers unite themselves more fully with the current of life. Let the religion be Joy, but with a worthy and dignified sorrow in death itself; and treat death as an ordeal, an initiation.”

Near the end of his life, he instructed a pupil simply to “choose the religious system most convenient to you and to your work”.

Crowley was eventually introduced to Gerald Gardner. They became friends, with Crowley authorising Gardner to revive Britain’s ailing O.T.O. The writings of Aleister Crowley were instrumental in Gardner becoming the founder of the Gardnerian tradition of Wicca.

I think Aleister Crowley was an early eclectic Witch and his work was a vital step in the foundation of neopagan movements and religions. Following his words: Let the religion be Joy!

This is very interesting. It’s nice to see how he progressed in life. Thanks for sharing!

Francisco,
I had no idea that Gerald Gardner and Alester Crowley were friends. It’s all starting to make sense know, I like how you broke it down and I can see why I was very confused at first.
This was so informative and I love it when the light bulb goes on and you go ow my this makes sense know.
Blessed Be!!

@Francisco I enjoyed this very much! I have read about both men in my practice and how they relate to paganism but I didn’t realize the 4 sides of Alester when it came to the religions. It’s interesting that he had 4 different views on the subject and then was good friends with Gerald too. I enjoyed reading it & learning from it!

PS: I love the Coffee Consecration!

Thank you, Francisco, for all of the work you do to provide us with all of these resources.

I am a subscriber to your YouTube channel because I find the videos to be informative and well thought out/well presented. I hope more people from Spells8 will check it out.

Thanks for your comments, @Amethyst @Jeannie1 @Siofra @praecog29!!

Finding these quotes was a real relief to me. I just feel that all magick is magick. But there are so many labels out there that labeling myself feels like a huge task. “Eclectic” is good enough and now even more than before!

I like to use Eclectic because I can’t find anything close to what I would call it. It’s definitely a mix, but magick is magick and everyone’s path is different.

It is an interesting statement and subjective at this time. This is not the platform for this conversation but I do want to say that I prefer to be objective for legal accusations. This one is particularly grim and due to my job, I have investigated issues of this nature.

Is it possible? Sure? All I see are claims and rumors with no validity.

Innocent until proven guilty, in the USA. Other countries will deem accordingly.

of burning someone at the stake.

I don’t know what to do about flagged content but your response is perfect.

@Francisco, thank you, again, for sharing this information. I look forward to learning more about him and I put Triumph of the Moon on my reading wish list because it’s been recommended on here before.

Aleister Crowley was an extremely controversial figure in his time. He was openly bisexual and wrote about all sorts of taboo topics back in the 19th century. He had lots of enemies and some of them made false accusations against him (being a satanist, doing human sacrifices, abusing children…).

Like you mentioned, Apikaile, ironically those are the same type of things said about witches for centuries…

There is a case to be made about him being a sexist, racist, etc. like many people in his time. There’s an interesting post about that in Thelemic Union.

Aleister Crowley was an extremely controversial figure in his time. He was openly bisexual and wrote about all sorts of taboo topics back in the 19th century.

Absolutely agree, which in my mind, begs to the question, why would someone put themselves in a position that would make him a target, if not, a spectacle to some.

I practiced GD but didn’t resonate. I still am going through Rosicrucian studies (which favors the Egyptian Pantheon and Alchemy) but I find myself feeling like I am going through academics and missing the point. I am exposed to Aleister’s work but, never, have I ever broken down the different “evolutions” of Aleister’s personality. I found it a representation of a Savage Pagan/Primal mentality stepping forward through Progressive states of mind. It is almost like he went through 4 lifetimes in 1 lifetime.

I still resonate more as Wiccan. Despite the empty feelings of Ceremonial Magic studies, it is important for me to do my best to understand the knowledge and stick to facts with the consideration of the integrity of the resources that were placed before me.

I am happier, here, in this state of mind and I am able to interweave beliefs, magical models, and thoughts into a harmonious manner.

I don’t know what to do about flagged content but your response is perfect.

Thank you. I do wish to respect an opinion.
Children are near and dear to my heart. I do Search Party CTF’s, finding missing people, especially children. It is the least I can do.

I spent quite awhile learning about the fascinating twisty path of the Golden Dawn: Kaballah/Tree of Life as linked to Tarot, Rosecrucians/Knights of Templar/Freemasons, occult trends of late 19th to early 20th century and its most prominent figures and etc. aka “high magic(k).“ Very ritualistic and formal (formulaic), focused on spiritual results. More (shall I say) patriarchal in its structure and practice. Exclusive.
Wiccan is naturalistic: linked to physical-seasonal-observable resources and tools, simple concepts and “intentions” that are accessible to anyone who is interested and motivated. Inclusive.
Of course these are my opinions, not necessarily factual statements.
I love learning about stuff. (For its own sake, not the kind where it’s “lesson learned.”)

I’ve always felt the same way. High Magick is just too structured and for me it just feels aristocratic. Like you said, I see Wicca as the balance between the ceremonial and the more down-to-earth cunning craft. Great analysis!