Next up on our ogham journey is Sail. Not sure what ogham is? Here is a quick refresh…

Ogham is an ancient Irish inscription alphabet that was used to inscribe headstones and other important markers. In mythology, it was created by the God Ogma (OH-muh) to warn Lugh about a plot to steal his wife. Today, Ogham is used in magic and divination.

If you want to learn more about what ogham is in general, I wrote about that here: Irish Tree Language - The Ogham

I also have a video explaining the origin story of ogham that you can watch here: What is Ogham? || Ancient Irish Alphabet and Divination Tool [CC] - YouTube 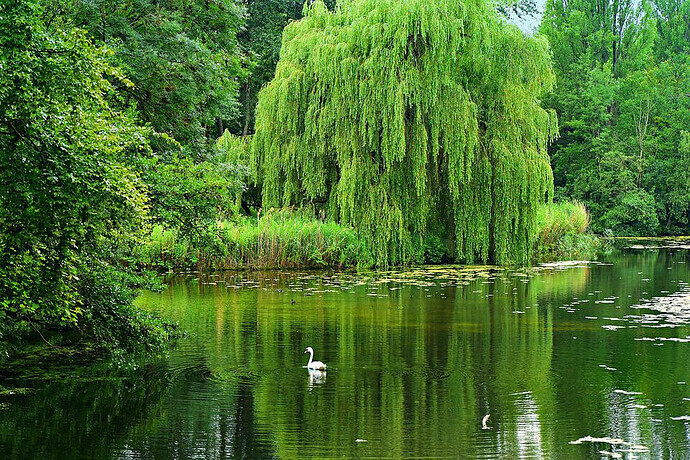 Sail (SAY-le) is the fourth fíd in the ogham alphabet. It is associated with only one tree, the willow tree. The word sail derives from the Old Irish root sal-, the same root that the word salach is derived from. Salach means “dirty”, so this fíd is denotes a possible level of impurity. However, there is more to sail than that. According to The Tree Council of Ireland, there are many different varieties of willow that are native to Ireland. These include the most widespread species of “goat willow, the rusty or grey willow, and the eared willow.” All willows in Ireland tend to grow in damp soil along riverbanks. If a willow is not growing near a riverbank, there is a good chance it is growing near an underground source of water such as a spring.

The connection with water gives rise to one of the keywords of the fíd: flow. This connection with water also gives sail the association of time, as the tide is connected to time, and the tide is connected to water. The association with death and the ancestors come from the word oghams in The Ogham Tract. According to Weaving Word Wisdom, there are three word oghams associated with sail. They are as follows.

We can read part of these word oghams from The Ogham Tract.

Li’ n-aimbi’, hue of the lifeless, i.e., hue of one dead, to wit, am for denial, so that he is not living but is dead. Li’ n-aimbi’, again, to wit, that is sail, willow, s with him, and hence it was put for the Ogham letter.

and later in The Ogham Tract

Luth bech, activity of bees, that is Willow s, for its bloom and for its catkin. Hence it is put for the cognate Ogham letter. The Ogham Tract

The connection with death and the ancestors is seen in the historical uses of the willow tree. It is said that willow was often used to make coffins. However, some sources say the way willow was viewed historically depends on where you were. Some places saw willow as bad luck while others saw it as good luck.

It is interesting to note, too, that willow is connected with inspiration. Erynn Rowan Laurie makes this connection because of the word oghams of lúth bech and tosach mela that connect the willow with bees. Honey is used to make mead, and both mead and honey are linked with inspiration. This includes music (the harp was made from willow in early Irish culture), poetry, and pleasure.

The tree itself is hardy and tends to only grow near a water source. Some species, though, can quickly take over rough soil. Wikipedia says the following about the willow tree.

Willows all have abundant watery bark sap, which is heavily charged with salicylic acid, soft, usually pliant, tough wood, slender branches, and large, fibrous, often stoloniferous roots. The roots are remarkable for their toughness, size, and tenacity to live, and roots readily sprout from aerial parts of the plant. Wikipedia - Willow

There are also several uses documented for willow throughout history. These include using the bark to create twine for harpoon lines, basket weaving, and various fishing implements. Many academic journals have also written about the pain-relieving affects of willow bark, but this idea was not popular in antiquity. It was not until after the invention of aspirin that the idea of willow bark being a good painkiller was born.

I took to my favorite old-time book on plant folklore, Plant Lore, Legends, and Lyrics, by Richard Folkard. There are several entries for willow in this book, a few which I find extremely interesting.

There is another legend extant, which states that the rod with which Christ was scourged was cut from a Willow, and that the trees of its species have drooped their branches to the earth in grief and shame from that time, and have, consequently, borne the name of Weeping Willows.

This little snippet is interesting to me because it connects the willow tree with death, specifically the death of an important person in history, in a similar way that the word ogham does. Lí ambí hue of the lifeless, is what gives sail the connection with death. The Ogham Tract is part of a manuscript that was writting beginning in the 7th-century. While it is said that Jesus was crucified in the 1st century, somewhere around 30 CE, it is interesting to me that these two ideas are similar from different places in the world.

There are even mentions of willows used for divination.

The Willow wand has long been a favourite instrument of divination. The directions are as follows:—Let a maiden take a Willow-branch in her left hand, and, without being observed, slip out of the house and run three times round it, whispering all the time, “He that’s to be my gude man come and grip the end of it.” During the third run, the likeness of her future husband will appear and grasp the other end of the wand.

There are many things to consider when reading sail in divination. First, we have the connection with water and flow. This brings in aspects of creativity, inspiration, and the arts. It also brings aspects of time, timing, and denial. Then we also have connections with death and the ancestors. Oftentimes, sail will point to messages being received from your ancestors, and it does not necessarily mean those that have already passed on.

There is also a connection with the past in general. This includes listening to those that have come before you, whether blood ancestors, mentors, or otherwise. It includes listening to aspects of timing and making sure that if you are planning something, you take proper timing into account.

“Where Beith is a fid of purification, Sail indicates what needs to be purified or what is being resisted or denied.” Weaving Word Wisdom by Erynn Rowan Laurie

Sometimes impurity is a simple indication that something needs to be cleansed. This could include your home, yourself, or any project you are working on. Since this fíd is also connected to inspiration, this could be an indication that you need a clean slate before you continue.

Here are some keywords I’ve come up with in my studies for Sail in regard to divination.

In a magical sense, this fíd can be used for flow or anything to do with water. This includes tides and timing. There are some sources that also say this fíd is connected to the moon. In a healing sense, this fíd may be helpful for issues concerning the blood and pain relief.

At the end of every fíd in her book, Erynn has questions and linked concepts to think about for each one. For sail, she writes the following…

Question: Where am I resisting the flow of my life? Am I listening to the world
around me?
Linked Concepts: Ancestors and messages from the ancestors, death, the realm of the dead, time, tides, knowledge of time and proper timing, denial, impurity, music, honey and mead.

While researching saíl and the willow tree, I remembered something from my childhood. I have always been fascinated with willow trees. Ever since I was a kid, the idea of sitting under a willow tree hidden behind the weeping branches made me feel at home. I wanted to plant a willow tree in the front yard of my home as a child. My nana, however, did not want any of that. She was very superstitious of willow trees at that time. She had told me that willows were messengers of death, that whever a willow was planted, death was sure to follow. She also said that if a willow died on your property it was a sign that someone in your family was meant to die as well. I am not sure if she still believes this way, and I probably won’t even ask her because this was about 20 years ago. I just seem to pick up bits and pieces of folklore from my family that was passed down from generation to generation, slowly losing its cultural reference point, but still there nonetheless.

Beautiful exploration of the Ogham symbol and the lovely Willow it is tied to- I really enjoyed reading this, @MeganB!

All of the correspondences are really neat to see- I’m sure I won’t remember them all (limited brainspace here haha) but the associations with water, flow, death, and bees (

!) really jumped out to me. I’ll try to keep these in mind if I ever encounter a willow or want to use the Ogham in spellwork/divination

Thanks so much for sharing your wisdom!