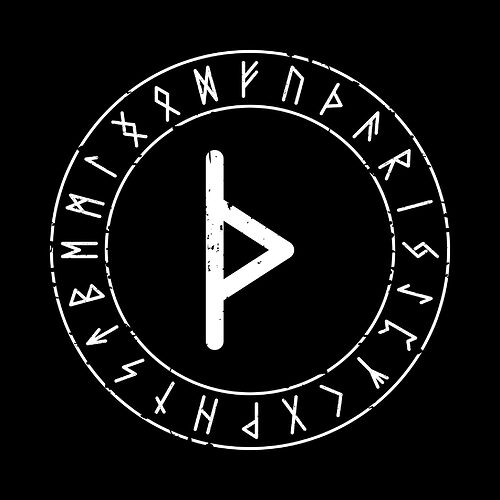 Brightstave/Upright: Reactive force, directed force, vital eroticism, regenerative catalyst. Reactions to your deeds may be dangerous. Take care in passively engaging or blindly grasping the outside world. (Outside your home) Do so with knowledge.

Merkstave/Reversed: Unwisely approached the “TH” stave betokens defenselessness & danger. Beware of enemies from the outside.

In Norse Mythology the ancient Frost Giants bore an evil son Loki whose sole mission was to torment humankind. They gave Norse Gods a purpose: defense & protection of their sacred realms. Treachery of the Frost Giants & all the danger they represent & the responsibility in face of opposition.

The thurs is a reactive force in brute nature. It is a reaction to the clash of two polarized forces & the transformation of that force into kinetic energy. This occurs in nature in the form of thurses (unconscious forces), but also the Asa-Thor makes use of an analogous force to combat the encroachment of unconsciousness. The TH-rune is a sign of the psychosexual symbolic response, which in unconscious beings leads to compulsion but in conscious ones to transformation.

Chamberlain, Lisa. Runes for Beginners: A Guide to Reading Runes in Divination, Rune Magic, and the Meaning of the Elder Futhark Runes . Chamberlain Publications, 2018.

Thank you again @Siofra, another interesting topic. I have runes, that I haven’t taken out of their box for years! Now I am inspired to do so. 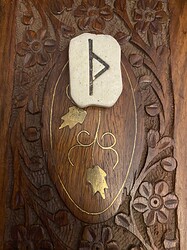 You can use this rune for protection.

Draw it on your arms, legs, body together in a line… with the point facing outward & it will offer you protection. It can be with your finger or pen or marker. But if you don’t want to wear it visibly, you can always just use your finger on your skin.

There are several books that I have on my Kindle Unlimited subscription. A lot of pagan books are free there.

The Big Book of Runes is a great reference if you would like to look further into this rune or others.

Thank you for the information and also for ways to use it- I really do love the idea of drawing the rune with your finger to call on its qualities. That is some quick, easy, and potent magick for free and accessible to everyone! Runes are full of possibilities

The root of the word “Thursday” can be broken into “Thor’s Day”- and this rune stems from that same origin too! It looks like this rune would be a good one to use a good luck charm for Thursday magick

Thanks again, @Siofra- these posts are a gift!

Good morning! Yes I have seen that about Thursday & being associated with this Rune & Thor. I will have to look into it because I think there are more with associations to days of the week. I know the “months” they are associated with, some are 1 month & some are a couple of weeks of 2 months & 2 signs.

I can add this aspect to the list of things I am going to post about the runes! Thank you for mentioning it @TheTravelWitch

Thank you once again for the work you put into these! An invaluable resource. <3

Here is my rustic Thurisaz rune that I created in bronze clay. 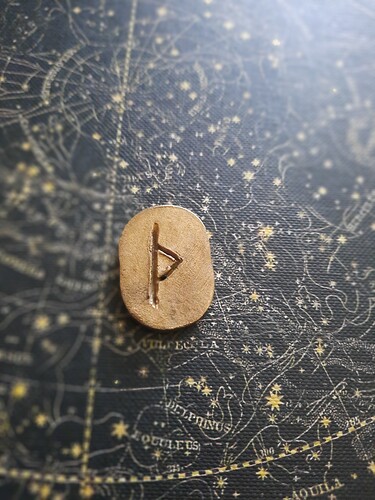 Rustic is good & that you made it is awesome. I wish my crafting stuff wasn’t scattered among the basement. My son moved home so my craft room is put on hold.

Beautiful! You did a great job!

Siofra,
I really appreciate your knowledge of this very sacred rune! I certainly feel the need for change in my life, Siofra you said
It’s quick and accessible to everyone so here is my rune! 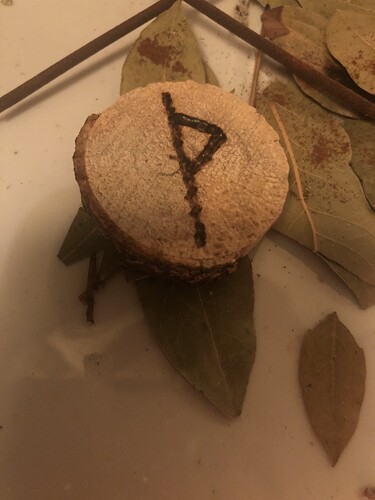 That’s great! I’m happy that they have meaning to you & that you are making your own! Great job!

That is a beautiful rune, @Jeannie1- it turned out amazing!

Thanks Travel Witch thank you for all your love

I always can depend on you, and I am so thankful to have you as a friend! I really do trust you and want to thank you for your kindness and admiration! When I first came to spells 8 I was lost and you guided me with lite! I can’t thank you enough!
Jeannie

Awww Jeannie, I’m blushing- you are so kind!

I am truly grateful for you too, and you know my secret: it is easy to be positive and spread love when in the company of such warm-hearted and loving people such as yourself! You have a home here, Jeannie, and we are all blessed by your presence

I hope you are doing well and that you continue to enjoy your rune studies- many blessings and much love to you!