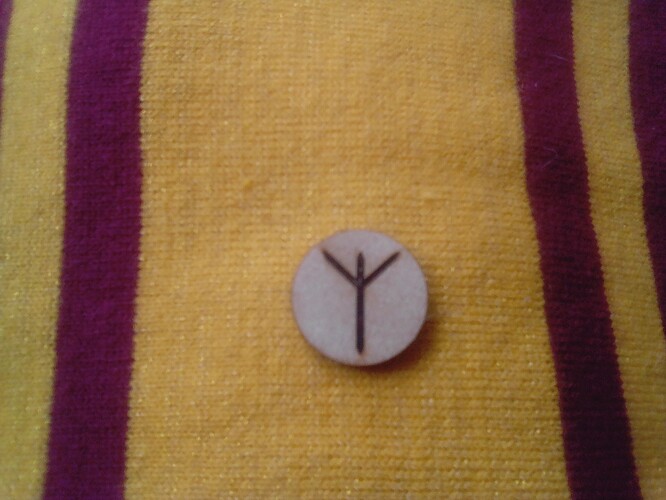 “Elhaz is the rune of defence and protection. Its shape is said to represent both the elk, with its imposing antlers, and the sedge plant, whose sharp leaves act as natural protection from would-be predators. Both images illustrate the power represented by this rune—a built-in protective force that discourages negative influences from affecting your personal experience. Drawing Elhaz indicates that you are safe from danger and that there is no need to fear. However, don’t take the protective energy for granted by being reckless with your actions, as this rune does not mean that there is no danger present whatsoever. It simply means that as long as you remain alert and clear-minded and in touch with your intuition, you are headed for a positive outcome. Elhaz has also been interpreted as a symbol of reaching up to connect with the divine for support. By listening to your higher guidance, you will know which moves to make to stay out of harm’s way.”

“Elhaz reversed may indicate that you have been doing just the opposite—losing touch with your intuition or even your common sense. You are advised to be on guard for any trouble that may be coming toward you while you’ve been disconnected from your higher guidance. There is a sense of vulnerability around you at this time, with the potential for danger or negative influences coming from
an unexpected direction. Don’t become paranoid or paralyzed with fear, however, as these reactions block your clarity and can prevent you from navigating the situation safely. Make sure you are taking care of your physical, mental, and emotional health at this time, and avoid making rushed decisions.”

“Elhaz can also refer to an upcoming opportunity or quest. Usually, this involves one or more other people, who may bring an offer or an invitation to join in a venture of some kind. As long as your intuition agrees, go for it—this is a favourable time for a new endeavour and it is likely to produce positive results at a rapid pace. If the central question of the reading relates to new ventures— particularly one involving risk, then Elhaz is an indicator of good fortune. On the other hand, Elhaz reversed in this context warns that someone may be trying to take advantage of you. Be wary of both business and romantic relationships with people you have just met or don’t know very well. Investigate all the possible angles and don’t hesitate to decline an offer if anything seems “off.” Remember, your intuition is your protection when Elhaz comes into play.”

Elhaz can also refer to an upcoming opportunity or quest. Usually, this involves one or more other people, who may bring an offer or an invitation to join in a venture of some kind.

Reading this, I feel like I’m about to embark on an RPG-like adventure!

I’m thinking that Elhaz paired with Raidho would make a great combo for travel talismans. General protection and defense paired with a rune about travel and adventure

Love it- thanks for sharing, @Liisa!

I know it did read like that didnt it lol

Not that I mind the odd RPG adventure mind you

Protection from Negative Energy and People, Protection of Property,

Very good to know, I really like this rune! Thank you for helping me with my protection and defense!
Lisa this is probably my favorite so far!
jeannie

You are so very welcome lovely

I’m glad I could help in anyway