Hi folks,
I hope everyone is doing well.
I would really appreciate it if anyone on here who honours a deity or deities in their practice could give me some advice on how to deal with offerings.
Personally, I try to honour the Horned God and the Triple Goddess each day, I also have a representation of the Mother Goddess, Gaia, on my altar. I often hear people talking and writing about offerings, but I can’t find any reliable information on what I should be doing - I know the items offered differ depending on the deity concerned, but what do I actually do with it? How long do I leave it on the altar and what do I do with it afterwards.
I’m sorry if this is a daft question, it’s just a practical thing that I’d like to do but I want to do it right.
Many thanks for any help

Russell,
It will typically depend on what type of offering you have on hand and in particular, which deity you are working with, which by your post I’m seeing that you work with Gaia. I personally work with Cerridwen whom is considered the Goddess of Grain, therefore I typically fill my cauldron(which is symbol of Cerridwen’s Cauldron) with grain and offer this. As for advice on what to do, I’m always gonna say do what feels right to you, but what you can do it search for correspondences related to your deity of choice and start from there, after a quick search I pulled this up online regarding the Goddess Gaia…" Appropriate offerings are barley or another type of grain, bread, honey, milk and even an offering of wine ." But again do what feels right to you my friend, And the only questions that are daft, are the questions you don’t ask! Thanks for the Question and Blessed Be

It definitely depends! If you’re working with food offerings, they can be eaten, but also burned or buried, and for some they just go in the trash or compost. It all depends on your deities. For example:

My advice is not to get too caught up on what to do with the offerings afterwards but instead to see their value as you’re giving the offering. Anyway, here’s an idea:

Having said this, the Charge of the Goddess (inspirational text often used in Wicca) says:

“Nor do I demand aught of sacrifice, for behold, I am the Mother of all things and My love is poured out upon the earth.”

The best offering to the gods are acts of joy, not physical objects. Keep your altar and sacred spaces clean, and share food or company with your loved ones.

They all like tobacco, so I offer that in little offering bowls. I also put things like rosebuds, and other mixtures in the bowls. I try to refresh them every few days, when I am done with them, I put them around by trees. I also will sometimes just burn an incense and ask them to accept it as an offering. Like @Francisco said, do what feels right to you. Sometimes quiet contemplation and they will tell you what they like,

This is definitely not a daft question. This question is fairly common for people who are new to giving offerings to Gods, Goddesses, and Spirits. I agree with Trey and Francisco in their points as well.

Your offerings are going to depend on how you view the divine, the different deities you work with or honor, and your specific path. If you’re interested, I covered this topic over on my YouTube channel 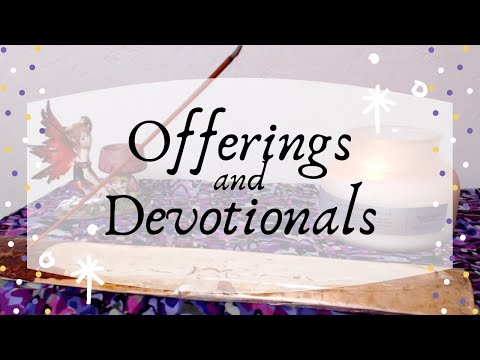 Thanks to everyone for your help, this is all very useful. I know I don’t have to leave offerings, but I feel that I want to. Megan, your video is very interesting, thanks for the link to your channel. Blessings everyone…