It's in the Cards :tarot_card: Tarot and Oracle

There have been a few posts that I have seen in the forum discussing the differences between oracle decks and tarot decks so, in the spirit of sharing information, I figured I would put everything in one place for easy reference and education! 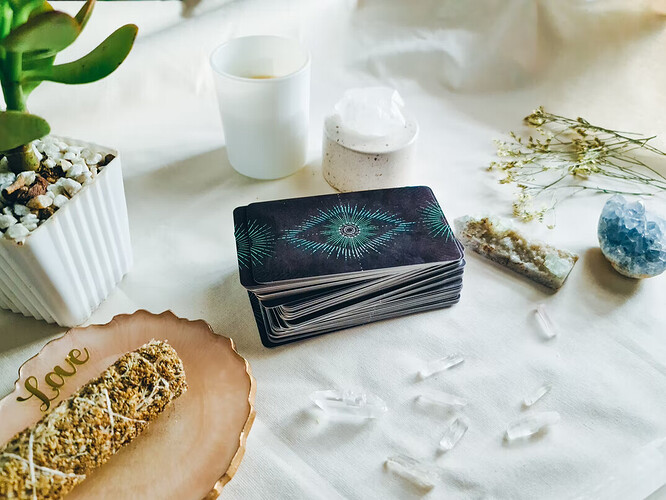 In our occult community there are so many different methods of divination. Cards, dice, pendulums, water, crystals, birds, clouds. You name it and there is probably a method of divination you can do with it. I mean there have been times where I have seen images in the bubbles from my coffee creamer. Today though, I want to discuss the different types of cards that we may see used in divination among magical practitioners.

When we think of fortune telling, we often imagine someone sitting across from us shuffling an ancient-looking deck of cards. In fact, I think tarot is the most widely used method of divination in the Western occult world. I could be wrong about that and I don’t have statistics, just my own perception, so don’t quote me on that. However, tarot decks are not the only types of cards we can use to divine or seek insight into ourselves. I want to go over the difference between tarot cards, oracle decks, Lenormand decks, and the Thoth deck.

Tarot cards were originally used for specific card games. These include games such as the Italian tarocchini, the French tarot, and the Austrian Königrufen (1). Some of these games are still played today, though you would be hard-pressed to find them in the United States. The tarot decks we know today were invented in Italy in the 1400s (2) by adding an additional suit to the four-suited deck. This suit, originally called the trionfi (triumphs) and an odd card called il matto (the fool), are what we now know as the Major Arcana.

The first ever tarot deck designed specifically for use in divination was created in 1971 by a French occultist named Jean-Baptiste Alliette, also known by Etteilla. (3) This was after someone else had made the (wildly historically inaccurate) claim that tarot actually has roots in ancient Egyptian wisdom. So from there, we can thank this French occultist for creating the tool many of us use today. You can see some of the images from his deck by clicking here. 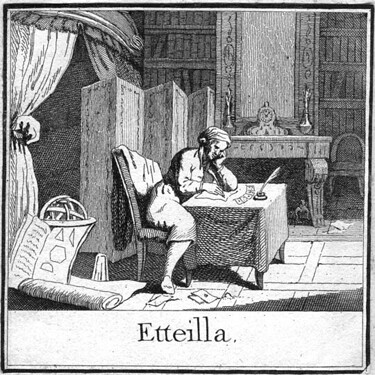 However, his deck is not the one we are all familiar with. In 1909, an occultist named Arther Edward Waite, better known as AE Waite, released a deck of cards that were illustrated by Pamela Coleman-Smith. Both Waite and Coleman-Smith were members of the Hermetic Order of the Golden Dawn, a secret society devoted to studying occult, metaphysics, and the paranormal in the 19th and 20th centuries.

Your traditional tarot deck is made up of 78 total cards. This includes four suits, the trump cards, and the fool. The suits vary widely depending on the deck used. However, they are usually some variation of cups, pentacles, wands, and swords. This is the deck that most modern tarot decks take inspiration from. If you have gotten a reading from my in the Freebie Friday posts, I’m sure you’ve seen me use Hanson Roberts Tarot deck. This deck is heavily influenced by the original artwork of Pamela Coleman-Smith.

But what makes tarot, tarot? The structure, of course. Tarot has a very specific set of rules and amount of cards. Each card is read in a specific way with specific symbolism. This allows for ease of use no matter what tarot deck you use. Each deck will generally have a Major and Minor Arcana. Some decks have added cards, too. For example, the Crystal Visions tarot includes a card for The Unknown.

You would be hard pressed to find a tarot deck that does not follow the standard 78-card system and symbolism. However, they do exist! 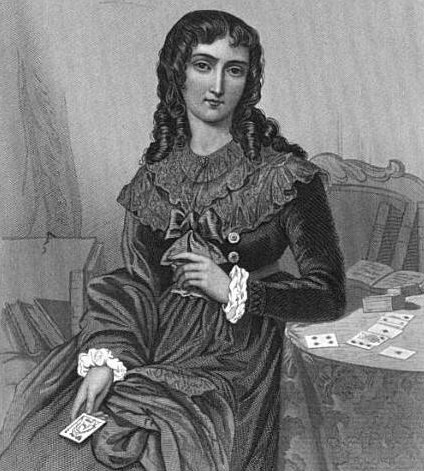 Unlike tarot, the Lenormand deck was named after a French woman named Marie Anne Adelaide Lenormand in the late 1700s. According to Labrynthos, the cards came into being in the late 18th century and the oldest surviving deck dates back to around 1799. This deck is currently kept in the British Museum in London. It appears that Lenormand cards are modeled after another card game called The Game of Hope, but just like tarot, it evolved into a divination method.

The cards came to bear the famous name of the Sybille of the Salons, Marie Anne Lenormand - also known as Madame Lenormand, only after her death in the mid-19th century. She was rumored to have used a custom set of the same cards that are seen today, her own adaptation. Hers was a large legacy, having been the most celebrated psychic of her time. She was associated with grand figures such as Robespierre, Marat (both French revolutionaries), Empress Josephine (the wife of Napoleon Bonaparte) and Tsar Alexander I of Russia. (4)

It is not clear to me if she is the designer of the cards themselves, but according to a few sources, her name was used on several different decks. This includes a deck of 36 cards known as the Petit Lenormand, or simply “Lenormand Cards”. These are still used today! Rather than focusing on symbolism and intuitive reading, the Lenormand cards deal with slighlty different issues, though they can be read in the same manner. It appears that the Lenormand cards may have been the first ever oracle deck!

Some examples of cards in the Lenormand deck include the following…

You can read more of the cards and their keywords by clicking here.

Oracle cards as we know them today are widely available and vastly different from one deck to the next. The Lenormand deck, I believe, paved the way for others to run with the idea of a deck for divination based on countless symbols, situations, and figures. Our daily oracle draw post shows many different types of oracle cards, for example. They are each different. Each have different themes, different images, and different ways of presenting their information.

Some oracle decks, like the Celtic Tree Oracle, use a different system of divination combined with imagery to create a deck. Others use affirmations with gorgeous pictures to evoke emotion. Some even use images of crystals or flowers to get their message across. This is the beauty of oracle decks. They are all different and each one follows their own structure and rule system. 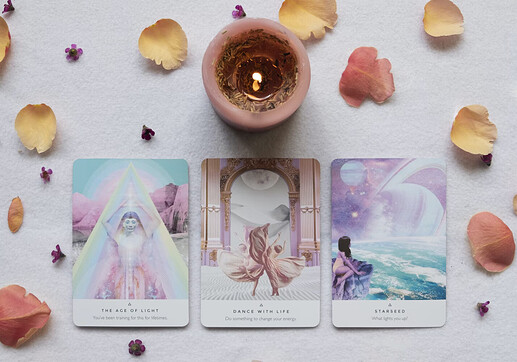 As you can see from the information presented here, the two types of decks (tarot and oracle) have very different structures. It is funny, though, that the history behind the two are very similar. They both started as card games hundreds of years ago. They both evolved over time to be used for divination. They both have also come a long way in a relatively short amount of time, giving artists and diviners alike the freedom to express their skills in ways that make sense to them.

Only Scratched the Surface

There are so many other types of card divination out there. The Thoth deck was created by Aleister Crowley. Playing Card divination uses regular cards. Different cultures have different systems they make use of as well. Take this post and run with it if you are interested in the history behind telling the future (or peering into your subconcious, whichever you believe).

I myself enjoy reading tarot and, more recently, using my only oracle deck. I have even mentioned creating my own deck for future use to be more personalized to me. No matter your divination method, there is usually a rich history behind it and reading with cards is no different.

So, do you have a preference? Tarot or oracle? Let me know!

I also wanted to mention that the oracle draw also includes cards from tarot decks so you get to see how different decks use their own imagery & message with each card. There are a lot of Oracle & Tarot cards of all kinds in that post.

This deck is currently kept in the British Museum in London.

Darn it, I was just at the British Museum in London and I missed it

That place is absolutely massive, after we saw a few things we had picked out (the Japan exhibit, the Jade room, and the cafe haha) we were too tired to get through the whole museum. But darn! I wish I could’ve seen the Leonormand Deck! Oh well, next time

Or… perhaps I’ll just get my own Lenormand Deck

It sounds absolutely fascinating, especially as a possible precursor to Oracle. I still haven’t been able to connect with an Oracle Deck (no matter how much I love the art, I haven’t had a magickal connection with any yet in the same way I do with my tarot decks), but I’d be willing to give this deck a try!

Thank you so much for this helpful guide of the decks, @MeganB!

it’s really fascinating, too, how one artist can take a concept such as The Tower and run with it in a completely different style that still conveys the same message.

and I’m not sure if it’s just kept there for safe keeping or if it’s on display. The article didn’t say. Before writing this post I always thought that Lenormand was a super complex system because of how people talked about it. Now I’m not as intimidated

Thanks for reading @debra2

I know it was a massive wall of text

but I even I learned something!

There have been a few posts that I have seen in the forum discussing the differences between oracle decks and tarot decks so, in the spirit of sharing information, I figured I would put everything in one place for easy reference and education!

Thank you sooooo very much for your time and effort in putting this post together! It always brightens my day to see posts about tarot or oracle cards and now I have the new itch to scratch - Lenormand!

Or… perhaps I’ll just get my own Lenormand Deck

It sounds absolutely fascinating, especially as a possible precursor to Oracle.

Yep, after reading the info on Lenormand Decks, I started my search online to find one for myself

So far, I’m liking the Scrying Ink deck but the search has just begun! 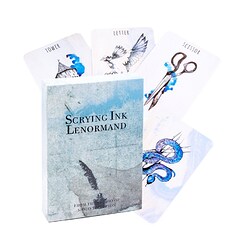 Didn’t even think of that haha! You’re right- it may be in the private collection and not on public display. All in all, sounds like a much safer bet to just go ahead and buy my very own Lenormand Deck!

Ohhhh look at that- look at those colors! I am loving the blue theme in the Scrying Ink deck

Enjoy your search, Kat, and please feel free to share about any interesting decks you find! I’m gonna be on the hunt too

that Scrying Ink deck looks so so good! I love the colors and feel of it