I struggled for a bit thinking of what I was going to write for this challenge, but I just had an epiphany this morning and now I have thoughts.

I have always been fascinated by liminal spaces. I have gone down rabbit holes 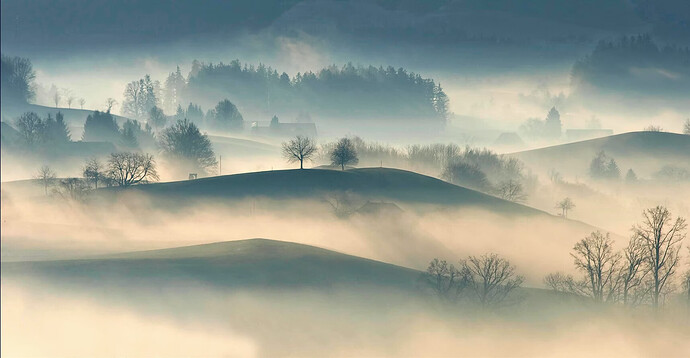 Liminal spaces are hard to describe, but they are essentially an “in-between”. I hear that and I think back to the episode of Charmed (the original) where there were demons in the home and they had to avoid the “In-Betweens” like thresholds. I can’t find a good clip of the episode, but I believe it’s season three, episode three called Once Upon A Time. Anyway, a liminal space…here’s a quick definition I found on the internet.

The temporal dimension of liminality can relate to moments (sudden events), periods (weeks, months, or possibly years), and epochs (decades, generations, maybe even centuries). Twilight serves as a liminal time, between day and night—where one is “in the twilight zone, in a liminal nether region of the night”. Source 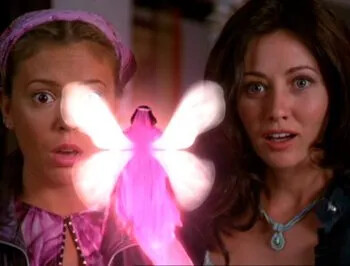 Of course, if you search for liminal spaces on the internet, one of the first things that come up is architecture. While that’s all good and well, that is definitely not what I’m talking about when I say liminal space. In the occult or spiritual communities, liminal spaces are those places that are between worlds; places that exist at one point in time and then seemingly disappear in the next.

I don’t have a specific source for this, but I have read enough liminal space stories to know that it’s a common theme. One of the most common stories of liminal spaces happens along long stretches of lonely highway at night. Someone is driving along this road and happens along a building. Usually it’s a gas station or a convenience store. At the time, the person driving needs to either go to the bathroom, get gas, or grab some snacks. So, they park, hop out of their car, and go into the building. But nothing seems right. They can’t place it, but something is off about the building or the people (or both!). The person usually quickly does what they need to do and then leaves. When they come back the same direction on the return of their trip, the building doesn’t exist. When looking on maps, they can’t find it. And when they tell people of their experience and ask where the store is, no one knows what they’re talking about. 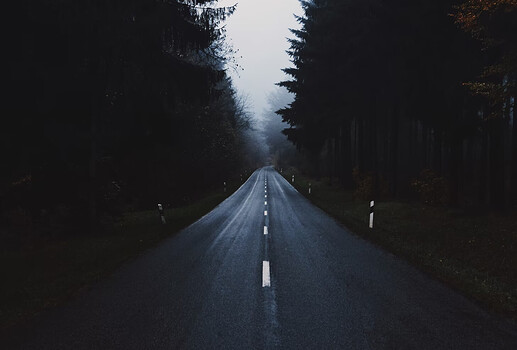 This would be considered a liminal space. No one knows what happens or why, but those buildings from another time, another place, or another whatever merge with ours for a seemingly random moment in time only to disappear later.

But what does this have to do with the dual wielding challenge? I’m finally getting to that part! Let’s talk about my epiphany real quick.

At the foundation of liminal spaces is the merging of two things. This is either time, space, objects, or concepts. The epiphany I had this morning was around fog because it’s been very foggy in the mornings where I live. Fog has always given me liminal space vibes because of it’s ability to obscure and dampen sound. But what causes fog? In our area, I have noticed that when it is warm during the day but cold at night, we have fog in the morning. So the coming together of hot and cold, the middle place of that combination, creates the liminal space that allows for the formation of fog.

Fog is also the combination of water and fire. Fire is what gives us our heat here on Earth and water is what creates the fog. Working with both together to create fog (or even steam!) gives us a liminal space. I have always loved working in liminal spaces, too. Right in the morning, just as the sun goes down, in the darkness only lit by candles, meditating right when I wake up or right before I go to sleep. Again, liminal spaces are fascinating to me! Here are a few other liminal spaces I thought about this morning that could prove powerful in someone’s craft.

→ Creating the spectrum of gender with agender/nonbinary folx in the middle.

→ The power of Twilight or Dawn is just as obscuring as fog is. Our eyes may play tricks on us, or are we just seeing through another in-between space?

→ When our breath hangs extended in the air, whether on inhale or exhale, our bodies center and focus if we pay attention.

→ When I cleanse a space, I always have a door or window open. Pushing things through the threshold, the liminal space, into the outside world is an act of magic on its own.

→ We’ve recently had two eclipses! This echoes back to light and dark but on a more intense level. In the middle of an eclipse, things go dark. Life can appear to be suspended in time as you’re watching the transition through liminality.

I am sure there are hundreds more liminal spaces and ways you can combine two different concepts, objects, or ideas to create liminality. As a witch or magical person, we often work in those liminal spaces. If you cast a circle to create a sacred space, you are creating a liminal space between this world and the next. If you astral travel, that is a liminal space between the physical and the spirit. There is so much more potential for further exploration on this subject! I know I didn’t go the usual route with this challenge, but liminal spaces have always been fascinating, and creating something with two opposing forces has a tendency to become magical.

16 Likes
Time Keeping and the significance of seasons
Where is the crossroads
Garnet December 5, 2021, 1:53pm #2

The idea of liminal spaces and fog is an interesting concept. Rather like, if you could just reach far enough in the mist, you could touch… something. ‘It’s’ there, you can’t see it, hear it or touch it, but you know ‘it’s’ there…
Thank you for giving my brain a nudge so I understood.
Stay as nice as you are.
Garnet

@MeganB This is a great challenge entry!
Also, I remember that episode of Charmed. Like @Garnet the fog and liminal spaces facts you mentioned were interesting, and ironically we had a dense fog alert here this morning. Fog has that beauty aspect,especially gliding over water or enveloping mountains, but also an eerie feeling as well.
Thanks for this abundance of information!

Very nice entry @MeganB! I don’t remember that Charmed episode but I get what you’re saying. Especially with that fog explanation, that was really well done!

I really enjoyed this entry. I had recently just started hearing or seeing the word, I could figure out the meaning from context, I just like to really know what things are or what they mean.

Oh, I didn’t know there was a name for it! LIminal. I’ve been calling it “betweeness” (yes, liminal is better). I have preferred betweeness in colors and flavors since I was a little girl. Like iridescence in shot silk and those baffling colors in the Crayola box – is red orange more red or more orange? Is blue green more blue or more green? Is sweet and sour more sweet or more sour? And bittersweet chocolate! Or emotions. And twilight/dusk and dawn are my favorite times of day. That is fascinating about some drivers finding the garage that can’t be found again. Sounds like Brigadoon

Or dreams when you wake up but then you realized you didn’t actually wake up. You just dreamed you woke up. I loved your entry and will try to think of ways to incorporate liminality in my practice.

Liminal spaces are a fascination of mine- airports, bus stops, train stations, driving on the highway early in the morning- all of those places that seem to exist outside of time, in a little bubble of their own where the rules are different and you feel frozen in a different world.

Ohhhh just thinking about it gives me shivers! Liminal spaces are both fun and kind of creepy!

But just a friendly warning from someone who has spent a lot of time in those peculiar, in-between places you visit on journeys:

Maybe liminal spaces are somehow attached to the world of the Fae- I don’t know, but they certainly have some kind of sense/time-altering quality that can really mess with your mind

I could go on and on about liminal spaces- this was an awesome topic to choose for the challenge, @MeganB- great job and thanks for exploring it!

Oh, thanks everyone! I had no idea liminal spaces were that popular

if you could just reach far enough in the mist, you could touch… something.

This is exactly how fog makes me feel! That and frustrated because people don’t turn their lights on when they’re driving and then I can’t see them…but that’s different

That’s is my favorite episode

That episode gets me every time because I’m like OH NO DON’T STAND IN THE DOORWAY!

This is a great challenge entry!

Especially with that fog explanation, that was really well done!

Thank you very much Amethyst! I definitely recommend that episode, even if just for nostalgia reasons lol

I just like to really know what things are or what they mean.

Well, liminal spaces are another great rabbit hole for you to explore

I loved your entry and will try to think of ways to incorporate liminality in my practice.

Thanks Mary! Those are all definitely places where liminality can be found! I love your descriptions, especially with the colors

Definitely a motto of liminal spaces! I don’t know if they’re attached to the Otherworld or a different realm in the Multiverse, but they definitely feel otherworldly when you encounter them!

This Is really interesting. I personally find liminal spaces quite fascinating.

Liminal spaces have been a fascination for me too and I’m thrilled I’m not alone!

Depending on the place and situation they can be deeply peaceful or deeply unsettling… I love how you extended the idea to many more continuums and not just space/time! And even within space and time… the sacred spaces we create do definitely count, that’s a beautiful observation. And gave me a very practical idea of starting to use that more intentionally instead of taking away from my sleep.

Maybe liminal spaces are somehow attached to the world of the Fae- I don’t know, but they certainly have some kind of sense/time-altering quality that can really mess with your mind

This made me think, we intuitively feel like we’re not in the everyday world when we’re visiting a liminal space… also us having power to create our own through our rituals… that’s our space and time, and whoever we choose to share it with. There’s an act of carving out a piece from the ordinary space/time and assuming power over it. That power makes us feel safe, confident and in control, and invasions to that space feel exactly like that, invasions. Maybe all liminal spaces have their creator, and how we feel in them has to do with their energy and intentions (and of course how they resonate in us).

Maybe all liminal spaces have their creator, and how we feel in them has to do with their energy and intentions (and of course how they resonate in us).

Ohh…that’s an interesting thought! I’ve always felt it as more of a foreboding “you don’t belong here” type of feeling…