Sabbats in the Southern Hemisphere

Hey beautiful witches, i have a question, i know this has most likely been asked but i don’t know the answer so i will ask the question… So i know Mabon is coming up this month and for someone in the Southern Hemisphere like me in Australia, do i celebrate Ostara or do i celebrate Mabon as well even though there is a season difference? 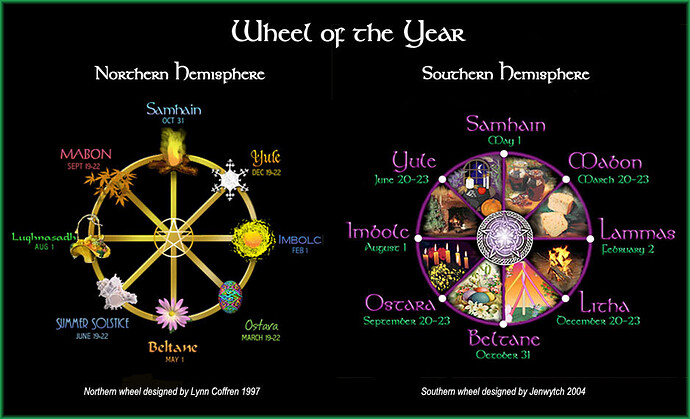 I’m glad that you asked @TheMuslimWitch , I never thought of it, and I’m also curious for a answer.

The Wheel of the Year is a symbol of the eight Sabbats (religious festivals) of Neo-Paganism and the Wicca movement which includes four solar festivals (Winter Solstice, Spring Equinox, Summer Solstice, Fall Equinox) and four seasonal festivals (celebrating or marking a significant seasonal change). Contrary to modern-day Wiccan claims, there is no evidence of an ancient Wheel of the Year in its present form but it is clear that the Celts of thousands of years ago celebrated the festivals the wheel highlights, even if these celebrations were known by another name now long lost.

In the ancient Celtic culture, as in many of the past, time was seen as cyclical. The seasons changed, people died, but nothing was ever finally lost because everything returned again – in one way or another – in a repeating natural cycle.

From World History: Wheel of the Year

I’ve seen that those in the Southern Hemisphere tend to follow the Southern calendar (as shown in the picture you shared), which follows the same cycle and holidays as the Northern calender, just adapted to suit the opposite seasons that the Southern half of the world experiences

The Sabbats are inherently tied to the seasons and based around the qualities of that time of year, so it makes sense that witches around the world would follow and practice the holidays as they happen in the environment around them.

Although it is certainly doable, and perhaps there are Southern Hemisphere witches who follow the Northern cycle, I personally think it would be a bit strange to celebrate, for example, the harvest festivals of Lammas and Mabon when the winter is in full swing and the new life of spring is still a ways away

However, many witches may live in places that don’t have 4 distinct seasons and/or live close to the equator- in that case, I’d imagine it boils down to following whichever system they feel attached to.

Disclaimer that I’m located in the Northern Hemipshere, so these are just my opinions and observations! Hoping to hear from some folks who live in the Southern Hemipshere to share their personal thoughts and experiences

Blessed be to witches around the world!

Thanks @TheTravelWitch, i guess i was curious since for the Southern Hemisphere witches Mabon is coming up and as i can see here from just looking outside my backyard, flowers are blooming thousands of bees are buzzing and the grass and trees are greener than ever with a cool breeze to warm days. So to me i think i would follow the holidays but in reverse. Its only sad that i will hear about all your great holiday where you guys can relate and although i will be celebrating alone i will have a different experience… But then again we can’t all live in one place since we are all so diverse so i guess i will embrace my differences and still let you guys all know how it all goes… Oh btw do you have any decorating or seasonal suggestions for each of the holidays? I am new as you know and would like to watch, read or listen to any suggestions you have so i can print it and keep it for the future…

On several of the witchy Instagram pages I follow they say that Mabon is coming up for the Northern Hemisphere and Ostara for the Southern Hemisphere.

yes they do but i guess i mean for us is spring at it’s finest and also the next upcoming holiday here is Beltane which meets with Halloween and still spring so i guess i can get some nice flowers either fake or even better real every week and when it comes to Beltane i can get some Halloween decorations like pumpkins etc… I was wondering though, is there rituals or anything else involved i should know?

There are rituals on site that will help you out, or you can make up your own. You can find some information and the different Sabbats rituals here.

Thanks i will check it out now

It’s a bit overwhelming especially when you get bombarded with all information for the Northern Hemisphere but you live in the South. I agree with what Brianna said above.

Here’s a related topic: Celebrating Ostara in the Southern Hemisphere

I lived most of my life in South America and in my experience both ways are valid. Go out in Nature and experience Ostara, the best time of the year is coming! Your rituals will organically match those energies. However you can celebrate Mabon with us, “in spirit”, as if we were all in the same calendar. After all, we are all celebrating independently, together.

Thank you such good advice

I came across these articles while researching the upcoming Mabon …

This article in the first paragraph states Ostara is in March for southerners
How to Celebrate Mabon: The Autumn Equinox (learnreligions.com)
and
This website is solely dedicated to southern wiccans
Wicca in the Southern Hemisphere - Sacred Space (weebly.com)

In both articles though it’s reallys up to the practitioner as others here have stated.

Thank you i will check them out now

@Francisco - A printable of the southern hemisphere Wheel of the year would be amazing for all of us Southern Witches!!!

I agree, it would be nice to have both southern and northern so we don’t divide anyone due to their location

I the mean time my amateur wheel is good enough

@mikayla Thanks for the suggestion! I went ahead and modified the current Wheel of the Year printable page into a Southern Hemisphere version! 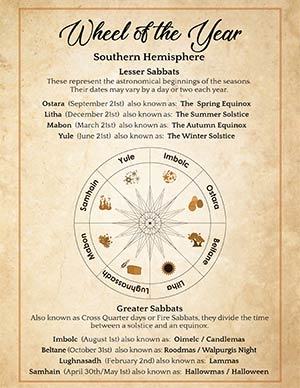 I’m starting a Grimoire PDF collection specifically for pagans in the South. Let me know if you have any suggestions or ideas!

PS: @TheMuslimWitch did an awesome job with her Southern Wheel of the Year Art! Check it out here!