My mom received some flowers for the garden from a coworker last week and we weren’t quite sure what they were. At that point, they had just been long green stems with little buds on top. Well, they have started to flower and open! I used my Seek app from iNaturalst to help identify them and we now know they are called Siberian Larkspurs. I have never heard of this flower so I decided to write up my challenge post on this particular part of the buttercup family.

According to the Wikipedia page for this particular flower, it is commonly called Siberian larkspur and Chinese delphinium. It is not actually native to our area, rather it comes from Russia and China. It is grown in several different cultivars with some of the common names being Blue Butterfly, Summer Morning, and Blue Mirror. Our particular flower is a beautiful shade of blue. 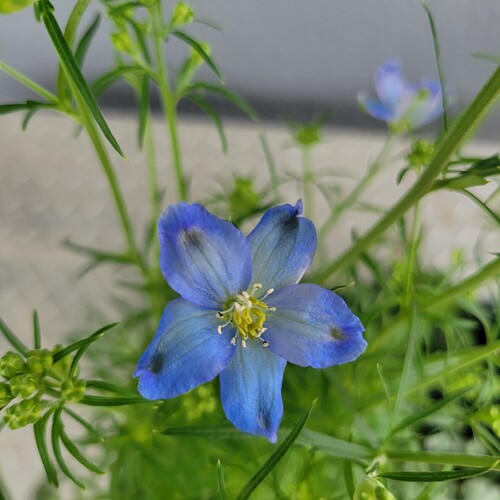 What I find interesting is that the plant is poisonous! Apparently many other types of larkspurs are also poisonous, but I was not expecting this beautiful flower to be dangerous. It also grows in various other shades of blue as well as white and pale pink.

The USDA website says that every single part of the larkspur species is poisonous, but that new growth and seeds have the highest concentration of the poisonous substance. They do not say what specific toxins cause the issues, but they do say it is a combination of several different alkaloids that act as a neuro-muscular paralyzer. Signs of poisoning from the larkspur family include the following…

Apparently, larkspur is responsible for a lot of death in livestock if the flower grows in fields and is not controlled. As of right now, there is no treatment for larkspur poisoning, though it is suggested to treat cattle with different types of medications in the hopes of not losing the animal. Just because most websites talk about deaths of livestock due to poisoning doesn’t mean it is safe for humans. As I said, all parts of this plant are poisonous! It looks like even touching the plant can cause skin irritation for those that are sensitive. 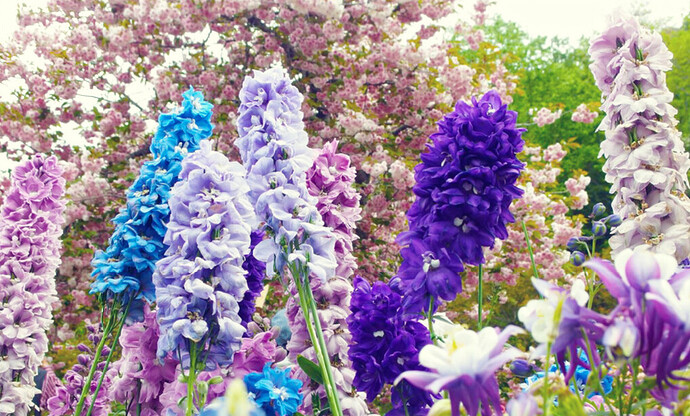 I mean, I was hoping it would be something cool that I could try making a tea out of but not anymore! Science Direct quotes a book called Meyler’s Side Effects of Drugs and says the flowers supposedly don’t contain the toxic alkaloids but honestly, who would want to take that chance?!

In Delphinium consolida (larkspur) there are toxic alkaloids in the non-medicinal plant parts (root, seed, herb), but they are purportedly absent in the medicinal part (the flower). Delphinium poisoning has rarely been reported; in one case there was ventricular tachycardia and seizures and in another fever and respiratory depression.

Seeing that the flower may not be toxic had me looking to see what the heck the flower would even be used for. Here are some things I came across.

NOTE: The sharing of this information is not an endorsement or encouragement to consume the flower from this plant. Please don’t consume things if you don’t know they’re safe!

MedicineNet says that delphinium flowers have been used to treat intestinal worms, fluid retention, and insomnia. It has also been used as a sedative to cause relaxation. (I imagine that part is because it causes the heart rate to slow and the muscles to relax. It is possibly a paralytic, remember?)

HealthBenefitsTimes lists several different folk and Indigenous ways of using larkspur, all with sources at the end (hooray!). According to them, the flowers and leaves of this species of flower were used in the United States army during rebellion to kill lice! They also list a few different folk uses.

Since this is a new plant to me, I do not have any specific UPG or associations with how it can or wants to be used within witchcraft. However, I did find some interesting folklor associations with it in Plant Lore and Legends, one book I have referenced many times in my writings here.

Larks-foot must be sowne in February, when the Moone is old.

This little piece of information comes from The Expert Gardener, a book written in 1640 that claims to be information “faithfully collected out of sundry Dutch and French authors.” According to this, if you are going to plant larkspur, it should be done in February during the last quarter moon.

The legend concerning the origin of the flower is as follows:—Ajax, the son of Telamon and Hesione, was next to Achilles worthily reputed the most valiant of all the Greeks at the Trojan war, and engaged in single combat with Hector, the intrepid captain of the Trojan hosts, who was subsequently slain by Achilles. After the death of Achilles, Ajax and Ulysses both claimed the arms of the deceased hero: the latter was awarded them by the Greeks, who preferred the wisdom and policy of Ulysses to the courage of Ajax.

This threw Ajax into such a fury, that he slaughtered a flock of sheep, mistaking them for the sons of Atreus; and then, upon perceiving his error, stabbed himself with the sword presented to him by Hector; the blood spurting from his self-inflicted death-wound, giving birth, as it fell to the earth, to the purple Delphinium, which bears upon its petals the letters at once the initials of his name and an exclamation of grief at the loss of such a hero.

According to this legend, the flower was created upon the death of a hero, Ajax. It is said that the flower rose from the ground where his blood was spilled and that inside, it bears his initials.

With this folklore in mind, and the medicinal uses and danger of the plant, I can say that I would probably ask this plant to take part in baneful workings or workings where I need to stop someone or something from happening. With its tendency to paralyze that which consumes it, I feel like this would be a good use for its abilities.

Overall, I am really glad I got to know this flowering plant, especially since I know it can cause irritation on my skin when I plant it! I am also glad to know that it has some folklore behind it, though it is dangerous. I will be planting it in the front garden soon, I believe. Or I might gift it to someone who does not have pets because my dog likes to eat plants

I also field guide flowers. This is so interesting. And it’s so precious…other than the poison part!

I really had never heard of it before.

I agree that it’s very pretty, but I wouldn’t chance it with the humans or animals (domestic or wild) eating it. I’d feel awful if I knew one of them was sick from it. Even worse if it was a small child or animal.

I would also agree with using it in magic to stop someone from doing something.

Thank you for sharing.

Oh, a buttercup with a bite!

I didn’t know anything about the Larkspur before this, but it is fascinating to learn about- what an interesting flower!

I’ve had quite a few reminders lately that just because something is beautiful doesn’t mean it is docile nor safe- sounds like the pretty Larkspur goes into this category too! Definitely not one to add to the herbal medicine shelf, and something to be wary of in the garden too.

But while it’s not one for the common herbalist, I think you make a great point about the possible magickal uses. I can definitely see it being a potent ingredient in banishing spellwork

Really fun to learn about! Thank you so much for sharing your wisdom, @MeganB- enjoy your Larkspur (if you decide to keep it)!

@Siofra_Strega - I’m not sure how much it would actually take to do serious harm to something that eats it but you’re right, it isn’t something I’d necessarily leave up to chance. I wonder if it’s harmful to birds and whatnot because interestingly, the nightshade I had growing wild in my backyard is toxic if we eat it or other animals eat it but the birds enjoyed the berries all the time.

@TheTravelWitch_Bry - That is such a good reminder! Just because something is pretty and soft-looking doesn’t mean that’s the truth

An important thing to keep in mind in flowers but also in everyday life!