What's in the Middle? - As Above, So Below Entry

Please forgive me ahead of time for this word jumble that is about to happen. I have some general ideas floating around in my head and I am not sure if they will be put into coherent sentences or thoughts…but bear with me! Hopefully I can clearly express what is going on in my brain.

When I think of “As above, so below,” the first thing that comes to my mind is this → “What’s in the middle?” If we look at the original text from the Emerald Tablet, this is not necessarily what it means. The original text is in Arabic and was supposedly translated from Greek. Then we have the Arabic version translated into English so it is possible that something has been lost in translation. But let’s read the original real quick.

The Sun is its father, the moon its mother, the wind hath carried it in its belly, the earth is its nurse.

The father of all perfection in the whole world is here.

Its force or power is entire if it be converted into earth.

Separate thou the earth from the fire, the subtile from the gross sweetly with great industry.

It ascends from the earth to the heaven & again it descends to the earth & receives the force of things superior & inferior.

& thereby all obscurity shall fly from you.

Its force is above all force. For it vanquishes every subtle thing & penetrates every solid thing.

So was the world created.

From this are & do come admirable adaptations whereof the means (or process) is here in this. Hence I am called Hermes Trismegist, having the three parts of the philosophy of the whole world

That which I have said of the operation of the Sun is accomplished & ended.

I’m not philosopher so I will not even begin to try and understand what this text is actually saying. I do want to focus on this one portion though, the portion where our phrase As above, so below, comes from.

This phrase reads, to me anyway, in a way to try and explain how the heavens and celestial bodies affect the earth and terrestrial realm. It may also be a way to explain the concepts of macrocosm and microcosm. In both of these ideas, though, where is the middle? We have celestial and terrestrial…but what is there between them? Atmosphere? Even in the macro vs. microcosm…what is there in the middle? A mid-cosm? I mean, I don’t think that’s a word but oh well.

In order to connect this back to where my thoughts are I need to mention the three realms of existence within Irish pagan practices. These realms are Land, Sea, and Sky. Taken from folklorist Alexander Carmichael, we get the following phrase and blessing.

Each realm in Irish mythology is on a spiral all connected by one central spiral (hello there, triskele

). Of course, I do not mean this literally, more so figuratively in that we can move between them all through the center. Anyway, the central part of the triskele is that liminal space between all three realms. Lora O’Brien (https://loraobrien.ie/the-three-realms-in-irish-tradition/) describes it as the world of Fire. These three realms or more complex than I currently understand so I will not go into too much detail here.

In reflecting on the phrase “As above, so below”, plus the connection between the three realms of existence in Irish mythology, I can’t help but wonder what we have in the middle. I know I can feel the liminality between the realms. Even when thinking of the three realms themselves, outside of the central spiral, the Sea is liminal for me. It is the middle realm between Land and Sky. It is a liminal space between the physical Earth and physical sky. It is a place of borders where one can be whisked away to an Otherworld, whether you like it or not.

Then I look at one of the pictures that @TheTravelWitch_Bry shared in the post for this challenge. 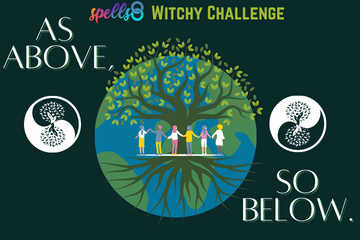 This image shows a tree with branches stretching to the sky and roots reaching into the ground. But what do we have in the middle of this image? Us! People! We are the space between spaces. What happens above us affects what is below us, yes, but it also affects us ourselves. The celestial and Divine energy that moves through the cosmos in whatever manner it does – because let’s face it, no one truly understands how it works – has a profound affect on our lives as people here on this planet. It goes further, though, because that Divine energy also touches the Earth, the animals here, and reaches into the core of our planet and breathes life into it.

We are also one macrocosm with microcosms around us. What is in the middle of our own collection of -cosms? We have us on a macrocosm level, then the Earth itself on a smaller scale…but what is in between?

20 Likes
Tending Brighid's Flame
:people_hugging: Weekly Witchy CHALLENGE - As Above, So Below
Sacred Triangle Tarot Spread - The Ins and Outs of an Issue
marsha June 3, 2022, 5:17pm #2

I love this @MeganB
I was hoping you would post about Liminality after your comment on my post in Tending Brigid’s Flame, and I’m so glad you did.
Thanks so much!

You’ve really got me thinking! It was/is sometimes a bit difficult for me to wrap my head around it all but I think at the heart of it, just as you mentioned, we are at the meeting point of above and below. We’re the middle! And as much as I strive to explore both the above realm and below realm, I think don’t put as much focus on the me or the middle. And that probably holds the key to connecting with the above and below

This is amazing, @MeganB! Thanks for sharing. I always think of us as the bridge between the heavens and the earth. To my way of thinking, we’re here to create the world in between and bridge any gap left between the higher realms and the earth plane. We channel the energy from one to the other.

@robin77 – It’s exactly as you said → We don’t put as much focus on the middle, the now, the present!

@BrightBear – When you put it like that, we are kind of like a conduit between the two!

Amazing post!! Thanks for taking the time to share this info! I always knew we’re in the middle. Its good to see others who back that opinion up!

I’m glad to know I’m not alone in my thinking.

A mid-cosm? I mean, I don’t think that’s a word but oh well.

If it wasn’t a word before, it’s a word now!

I love how you took the phrase and looked to the heart of it- the middle ground, that which rests in between. And goodness I’m always a sucker for more liminal space/liminality discussions!!! I am loving this entry!

These realms are Land, Sea, and Sky .

This is really interesting! It’s neat to hear about how different traditions and cultures define the realms

In some types of Buddhism, I remember learning that there are six (sometimes five, sometimes more) realms broken into godly realms, human/animal realms, and then multiple realms of hell within there.

When I took a class in Ikebana flower arranging, we were taught to design the flowers in accordance with the three realms/layers: Heaven (highest), Human (middle), and Earth (lowest). 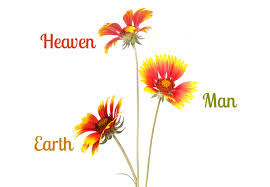 So many different ways to view the layers and levels of realms, but there are certainly some aspects that appear within each- and many that involve a human component that sits right at the heart, at the middle in the space in between

This image shows a tree with branches stretching to the sky and roots reaching into the ground.

I have to admit that putting the image together this week just kind of flowed naturally, not much thought involved- perhaps my creative senses were more connected than my thoughts were

This was such a great entry with so many wonderful points- you really got me thinking with this one, Megan! I really enjoyed reading it

When I took a class in Ikebana flower arranging, we were taught to design the flowers in accordance with the three realms/layers

Oh wow, i didn’t know flower designing was so intricate! I love learning about different beliefs in regard to realms of existence.

I want sure if you did the image on purpose but it definitely fits well with my line of thinking. In this instance, WE are the liminal space!

WE are the liminal space!

Gosh, I want this on a t-shirt!

Haha that would be such a cool shirt design!

Yes we are! I love that answer! We are here to be our highest selves and to live peacefully with all! Sounds easy, doesn’t it?

It definitely sounds easy but, as we all most certainly know, it is not

Or at least as far as I know. I can’t speak for everyone!

@MeganB
My goodness what a paper! I 'm sorry I was so late in finding it. I read it several times and finally copied it to Text Aloud so it could read it to me.
Jeez Megan, has anyone told you lately how smart you are?
The way you broke down each section was well thought out and presented.
I totally agree, ‘As above’ is the heavens and all it contains, “As below”, the earth and all it contains. But what was in the middle? You, me, us. Man.
I can’t say I’ve ever openly thought of it that way, but when you put forth that statement? I had an epiphany…you are right, absolutely right.
Thank you,
A++ loved it
Blessings
Garnet

@MeganB
Only the truth. I may be full of BS, but on this? I speak absolutely True.
It’s that beautiful brain of yours, always in high gear.
No wonder your tired.
Get some rest, Sweet Dreams.
Blessings to you and yours.
Garnet