Praying to the triple moon goddess

How does one pray to the triple moon goddess? I have accepted that I feel VERY drawn to her…

But I don’t know much about her. I’ve been reading but maybe someone here on the forum knows more about her?

Her history?
How to pray to her?
Is there a daily ritual or prayer you say to her…

Just needing to be pointed in the right direction. 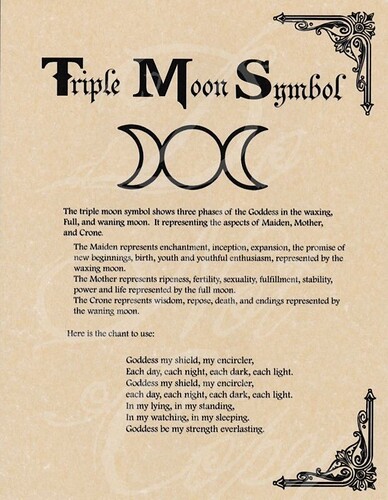 It’s funny, I can feel you’re really drawn to her, I’m really drawn to her too and the Moon in general! For me the connection isn’t that much in what I do or know but I feel it in my heart as deep love. I don’t generally pray to her, though I love the “Charge of the Goddess” prayer. Just reading it reaffirms my connection with her every time. 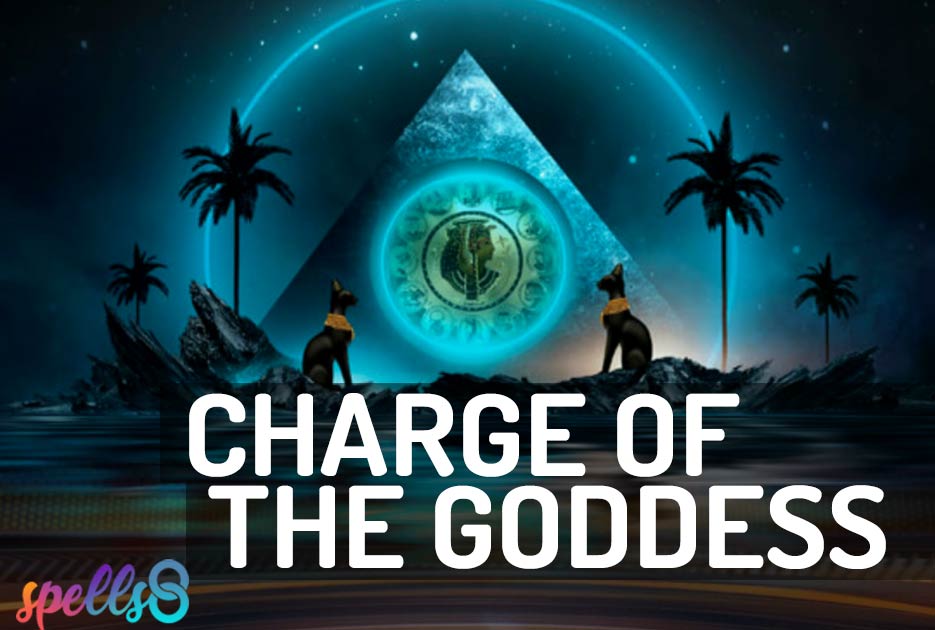 ▶️ Charge of the Goddess

Just spending time looking at the Moon, and laying down on the floor (yoga mats are great) or ground in her loving embrace in the quiet of the night are my favorite ways to connect with her.

I have 2 triple goddesses but they aren’t triple moon goddesses. Their triplicities are closer to maiden, mother, crone archetypes. & they are more associated with a sabbat or moon cycle.

However, I did find this with the Goddess being the Triple Moon Goddess & the Horned God (they work with each other, yin, yang)

Who are the Goddess and the Horned God?

In modern Wiccan practices it is encouraged to choose a deity that resonates with you. There is fluidity and freedom associated with Wicca. One can choose their own patron goddess or god.

I would imagine that any workings with the moon & the Lady, Luna, Selene would be working with her or invoking the Triple Moon Goddess.

I haven’t worked with her much since the very beginning of my journey. I do have some pdf files I can upload if you are interested I can send them to you.

It depends on which deity you’re being drawn to I think. There are quite a few triple moon Goddesses simply because that’s a common thing throughout history. Luna, Selena, Diana, Artemis, Hecate, and more have been connected to the moon. Hecate is probably one of the most popular ones since she is the Goddess of Witches.

Here is a good place to get started researching. Find a Goddess you like and get sucked down the research rabbit hole! LOL! There is quite a bit about Hecate on-site if you use the search button up there.

I hope this helps you out!

It’s Hecate. I believe. I heard this song the other day “Hekate” they were just chanting it over and over again and i wanted to know what it meant. So i did some research and i found out the meaning and then i saw the word “Hecate” and i started reading about her and was sucked in like a whirlpool so i believe she is the one drawing and calling to me. But, i will read about the others as well.

You’re welcome! As I said, there’s quite a bit about Hecate on-site. And there are some really good books. I wish you luck with your research!

When in reference to her being a triple moon goddess…she wouldn’t considered a ancestor would she? Or just a God…

I don’t think Hecate would be anyone’s ancestor, no, but a powerful Goddess nonetheless.

I guess i worded that wrong, lol

She is someone you could place a picture of on your alter though…?

However, it is my understanding that her triplicity isn’t the moon itself. It’s the Moon, Earth, & Otherworld. So that makes her a Triple Goddess. Brighid (Celtic) is a triple goddess because she is the goddess Smithcraft, Poetry, & Healing. I like to refer to her as my Light Goddess because my other deity is a Dark Goddess.

The Morrigan (Celtic) is a triple goddess in the sense that she can be singular or 3 there are 3 sisters, she’s also the goddess of the Otherworld, Magick, Cycle of life (life, rebirth, death). She is a Goddess of War but in modern terms you’re war, shadow work, using your strength, finding your strength, fighting for your power. She is a Dark Goddess as is Hekate.

Hello everyone! This time of year is my favorite of all! I am sending positive energy to you! This is my intent with harm to none, and so it is times three

I also want to share this wonderful story I came across (pathofshe.com)

made me fall in love with Hecate all over again! Enjoy! -much love

Excerpt from The Path of She Book of Sabbats. At Samhain, when the veil between the worlds is thin and the mysteries of …

“November 16 is the Night of Hecate which begins at sunset. This is the night of the Three-formed Goddess. Hecate is part of the most ancient form of the triple Moon goddess as Crone or Dark Moon. This is also the night of Hecate’s supper at the Crossroads. People who worshiped Hecate honored Her by performing Sympathetic Magick and holding a supper at what they believed to be the Crossroads.” Those are the first words of a lovely Article on Crystalwind.ca that gives some great information on t…

Hecate Is Going To Eat Your Face Witchy Wisdom

Got your attention, didn’t it? I’ve been thinking about making this post for some time, and by the end, it may begin to seem like it wasn’t entirely my idea. I can’t tell you what your relationship with Hecate is or should be. I can only tell you what mine is like, and how it differs from what you might read online. What your arrangement with her is may differ significantly. Uh-oh, the Goddess is unhappy. Better toss a virgin into the volcano. Hecate is very powerful, and holds influence over …

Make sure to check the replies because there is a lot of information contained within the replies of posts too.
@Undomeher, @Rowan, @Moonshaow have all had interactions & experiences directly with Hekate.

I knew she was playing in with the underworld. I remember reading that also she is sometimes represented by dogs. Which is “hellhounds” I believe it was that I read?

Let me ask you…do you know who the “Spiral goddess” is?

Hekate is the Goddess of Witches or Magick

The Morrigan is Magick though.

When I was listening to that song, they chant that name OVER AND OVER AND OVER. Somewhere I read it meant “magick” or “magical power” I do KNOW I read that might have been a different spelling?

Anyway. The important part of this was I got tranced saying that name Hekate not knowing what it meant. But I felt an energy shift. I thought I was just singing a song I didn’t realize they were chanting the name of a goddess.

Is it… possible…that I…like…invited her by chanting her name over and over again?

Absolutely it is! She was answering you.

I just got a cold chill through my entire body. Wow! I did the ritual after that…the one to bless my amulet and I felt a energy trance then as well. I wonder if that was her… I have always felt a female presence around me but I was always unsure of what it was. So I just ignored it

She is someone you could place a picture of on your alter though…?

Yep, many people do.

That’s where the confusion is coming in from I just read that it can be pronounced hecate OR Hekate.