Where do Zodiac Symbols Come From? 12 Signs and their Origin

Have you ever wondered… what do these symbols in the Zodiac mean?

I made a quick video explaining the origin of the Zodiac glyphs!

Where Do Astrology Symbols Come From 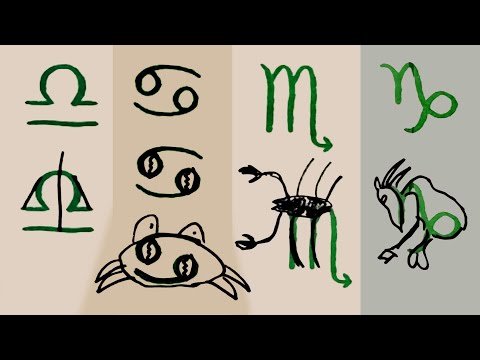 The symbols in Astrology are called glyphs. Each of these is a constellation. The ancient Mesopotamians, mainly Babylonians, named these groups of stars in the sky. They were used to represent the ancient gods and their symbols, and also as a farming calendar. Babylonian astronomers divided the sky into 12 equal parts matching the 12 months of the year.

Almost all of the 12 zodiac signs are depicted by an animal, with the exception of Gemini, Virgo, Libra and Aquarius. The word Zodiac comes from the Ancient Greek word zōidiakòs kýklos (ζῳδιακός κύκλος), meaning “circle of little animals”.

Origin of the Zodiac Symbols or Glyphs

The name Aries is Latin for ram, and its symbol representing a ram’s horns. Originally, the Babylonians named it the the Farm Worker but it was changed probably because of Dumuzid, an ancient god associated with shepherds. In ancient Greece, the constellation of Aries was associated with the golden ram of Greek mythology that

Taurus is Latin for Bull, the symbol represents a bull’s head. The constellation gets this name from a group of stars that form the profile of a Bull’s face in a V shape. This symbolism is very old, dating back about 5000 years. Babylonians called it the Bull of Heaven, and Egyptians saw it as a sacred bull that was associated with the renewal of life in spring.

Gemini is the Latin word for “twins”. In Babylonian astronomy, the two main stars (Castor and Pollux) were known as the Great Twins. They were minor gods and were called Meshlamtaea and Lugalirra, meaning ‘The One who has arisen from the Underworld’ and the ‘Mighty King’. Also titles of Nergal, a Babylonian god, king of the Underworld.

Its name is Latin for crab and it is commonly represented as one. The sideways “69” is an abstraction that is supposed to be the crab claws. But it has been represented as many types of creatures, such as a turtle. In Greek mythology, the crab was sent by the goddess Hera to obstruct Heracles (also known as Hercules) as he battled the water serpent Hydra, but he killed it with his club.

Its name is Latin for lion and its symbol looks a lot like the constellation of Leo, which also resembles a sickle or a question mark. Leo was one of the earliest recognized constellations, the Mesopotamians had a similar constellation called the Lion as early as 4000 BCE. The Greeks identified it with the Nemean Lion, a mythological monster who eventually was killed by Heracles.

Its name is Latin for virgin, also known as the Maiden. It’s the largest constellation in the zodiac and it was originally known as “The Furrow” by ancient Babylonians, representing the goddess Shala and her ear of grain. The Greek associated it with their fertility goddesses Demeter, and the spring goddess Persephone. The Virgo symbol is designed to depict the Maiden carrying a shaft of wheat as a symbol of fertility.

Its name is Latin for weighing scales. In Babylonian mythology, the scales were sacred to the sun god Shamash, who was also the patron of truth and justice. The symbol represents balance, when the sun enters this part of the ecliptic at the fall equinox (in September), the days and nights are equal.

Its name is Latin for scorpion. Babylonians knew it as ‘the (creature with) a burning sting’. The Scorpio symbol is meant to represent the Scorpion and its stinger. It is similar to the Virgo symbol, except this one has its tail pointing out, not curled in on itself like the maiden. Artemis and Leto sent a scorpion to kill Orion to stop him from killing every animal on Earth.

The Archer or Centaur

Its name is Latin for “archer”, and its symbol is an arrow pointing upwards. The Babylonians saw it as the god Nergal, a centaur-like creature firing an arrow from a bow. In Greek mythology, Sagittarius is usually identified as a centaur: half human, half horse.

Its name is Latin for “horned goat” and it dates back to the year 1000 BCE. Babylonians called it the “Goat-Fish” as a symbol of their god Ea. The symbol shows the hoof of a mountain goat and the tail of a fish. In Greek mythology, this goat fed the infant Zeus becoming a sort of foster-mother to him. Amalthea’s broken horn was transformed into the Cornucopia or “horn of plenty”.

Its name is Latin for “water-carrier” or “cup-carrier”, and its symbol depicts the waves of water. Babylonians called this constellation “The Great One” and it represents the god Enki himself, who was also associated with the destructive floods that they experienced. In Ancient Egypt, Aquarius was associated with the annual flood of the Nile in the early spring.

It is s the Latin plural for fish and its symbol shows two fish swimming in opposite directions. Babylonian texts from around 1000 BCE call it “the fish cord or ribbon”. A Greek legend tells that Aphrodite and her son Eros would shape-shift into forms of fishes to escape the monster Typhon. They tied themselves together with a cord in order not to lose each other in the Euphrates river.

Print these Book of Shadow Pages! (Note: A previous version of this Zodiac Wheel page had the symbols misaligned. They have been corrected here)

Click here to see my Book of Shadows and get more pages!

These are the twelve divisions of the sky as observed by the ancient Babylonians around the year 400 BCE.

While each of these sectors carries the name of a constellation, the zodiac signs in Western astrology are aligned to the equinoxes and solstices rather than the constellations. For example, Aries starts with the spring equinox in March and Capricorn with the winter solstice, December 21st in the Northern hemisphere.

Also, the constellations as we see them are not all the same size, so the Sun is not in each constellation for the same amount of time.

This is really really nice thank you! I am working on my 3rd BOS and it is gonna be full soon…lol

Correct me if I am wrong, but on the Zodiac Wheel some of the symbols for different Zodiacs are wrong. For instances: Libra, Pisces, Virgo, Aries, Sagittarius are not the correct symbols.

some of the symbols for different Zodiacs are wrong.

Good catch! Thanks for letting me know!

I have just fixed it and updated the page. They were misaligned. Make sure to download it now that it’s been fixed

I can’t seem to print the zodiac symbol page?

click it open, hit crtl p on your keyboard, then it should let you print.

Try again. It’s working now! Or use this link

Thank you. It worked. Love Your printable pages

Thank you for your kind words, Alisha! I’m glad you like them!

I always send new pages on the Spells8 newsletter so, just in case, make sure you check those emails to keep adding pages to your Grimoire!