It has been a long time since I wrote about ogham and I have learned a lot in the span of time. This post is a re-write of an older post I did on Beith, the first ogham fid in the first aicme of the ogham alphabet.

If you want to learn more about what ogham is in general, I wrote about that here: Irish Tree Language - The Ogham

I also have a video explaining the origin story of ogham that you can watch here: What is Ogham? || Ancient Irish Alphabet and Divination Tool [CC] - YouTube

Beith (bay-th) is the first fid (letter) of the ogham alphabet and it is the first fid that was ever created. The God Ogma wrote “b” seven times to convey a warning to the God Lugh about his wife. It was a warning that she would be carried away into the Otherworld or another country unless birch guarded her. The letter for beith is written with one vertical line and one horizontal line on the right side only. I’ve included a picture at the bottom of this post so you can see.

This moreover is the first thing that was written by Ogham, >-,-,- i.e. (the birch) b was written, and to convey a warning to Lug son of Ethliu it was written respecting his wife lest she should be carried away from him into faeryland, to wit, seven b’s in one switch of birch: Thy wife will be seven times carried away from thee into faeryland or into another country, unless birch guard her. On that account, moreover, b, birch, takes precedence, for it is in birch that Ogham was first written. (The Ogham Tract)

The Birch tree itself is a hardy tree. There are actually over 30 different species of Birch - many of them native to both European and North American places. Since the Ogham comes from Ireland, the feda (tree) that the Irish most likely saw was the Betula Pendula - also known as the Silver Birch.

The silver birch is a hardy tree, a pioneer species, and one of the first trees to appear on bare or fire-swept land. Many species of birds and animals are found in birch woodland, the tree supports a wide range of insects and the light shade it casts allows shrubby and other plants to grow beneath its canopy. It is planted decoratively in parks and gardens and is used for forest products such as joinery timber, firewood, tanning, racecourse jumps, and brooms. Various parts of the tree are used in traditional medicine and the bark contains triterpenes, which have been shown to have medicinal properties. – Betula pendula - Wikipedia 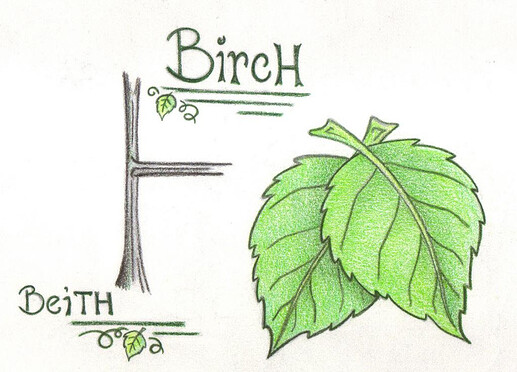 For figuring out what Beith means in divination, I look at many different things. First, we can look at the story of Beith’s creation. Ogma created Beith as a warning to Lugh. Seven Bs carved and sent to him to protect his wife. It is my own belief that beith is connected to protection and warnings, though I haven’t been able to find this connection anywhere else.

Next we can look at how the birch tree itself. It is silver or white in color. The bark on the outside easily peels back to reveal what is underneath. The Birch tree is one of the first trees to appear on land that is barren or has been swept by fire. This lends to the meaning of purification and resilience. New growth can happen once the old is cleared away.

When this symbol is used, it is representative of new beginnings, change, release, and rebirth. In some traditions, it also has connections with purification. – Celtic Ogham Symbols and Their Meanings

Birch was also traditionally used for cleansing and purifying the home and body. Birch twigs were used for brooms and the oil extracted from birch is a mild analgesic used for relieving pain. This further lends to the ideas of purification and cleansing.

If you are reading Ogham staves and Beith makes an appearance, something new is happening. A new beginning. Clearing out the old so new opportunities can be brought to you. It is also an Ogham of purification and cleansing. The silver/white color is definitely symbolic of purity, but also of rebirth. The way the bark peels back on the tree makes me think of peeling back layers of an onion. What we see on the surface is not always what lies beneath.

Here are some keywords I’ve come up with in my studies for beith in regard to divination.

Beith holds special meaning for me because it’s the first ogham I learned, and re-learned, in my ogham practice. It’s also one of my favorite trees, so that definitely helps! I have made protection trinkets from beith as gifts for family that I hope will last for years to come.

Hooray for exploring the Ogham!

This is timed perfectly too, as it is indeed the Birch Moon/Month right now! (From December 24 to January 20th- taken from the 13 Months of the Celtic Calendar). A great way to begin an adventure into the ogham

Thanks so much for sharing your wisdom, Megan- I can’t wait to learn more!

I agree! Thank you for revisiting the Ogham alphabet and its divinatory uses.

It’s sometimes hard to find reliable resources online so I appreciate the ones you linked.

@MeganB Gasp! You have a brand new subscriber! I spend a lot of time watching YouTube, especially channels as yours. Thank you. Your research on this topic is extremely thorough. The Ogham is something that I am interested in, but like a few other witchy topics of late, also slightly intimidated

I just drew this card in my Oracle deck today! Plus, I will be learning Ogham when I finish with Runes. This post is amazing! Thank you!

@TheTravelWitch I’m excited too! And it’s funny that this month is the month of Birch. Maybe I’ll take a page from the tree calendar and explore the ogham along with the month it’s associated with

@Francisco Yeah, finding good information is difficult about a lot of Celtic-related things lol I’m glad the links are helpful!

@LadyAuld.ofChico Aww thank you! I really enjoy the time I spend on videos and stuff so I’m glad to know you like them! Ogham can be intimidating for sure but if we take it one step at a time, we’re still making progress!

@Siofra Oh nice! I can’t wait for you to learn, too!