I found myself in an esoteric shop here in Warsaw yesterday and, despite going in just to look, I walked out with a bag full of tarot and crystals. So much for self control

The deck I couldn’t resist was the Tarot of Oppositions by Pierluca Zizzi and Michele D’Aloisio, published by tarot publisher Lo Scarabeo. 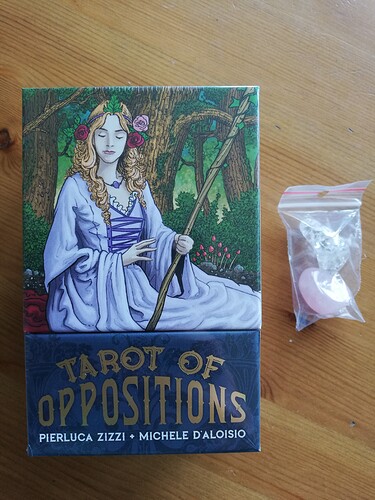 Having never heard of the deck nor having much of a description on the box, I was drawn in by the fact that every card has two illustrations.

As someone who has often struggled with reading reversals, I figured this deck would be a good way to be able to see both aspects of a card at once, making reversals much easier to read.

This deck is good for learning multiple meanings of each tarot card, but when I opened it up and read the guidebook, I was surprised to find that it actually goes much deeper than just reversals 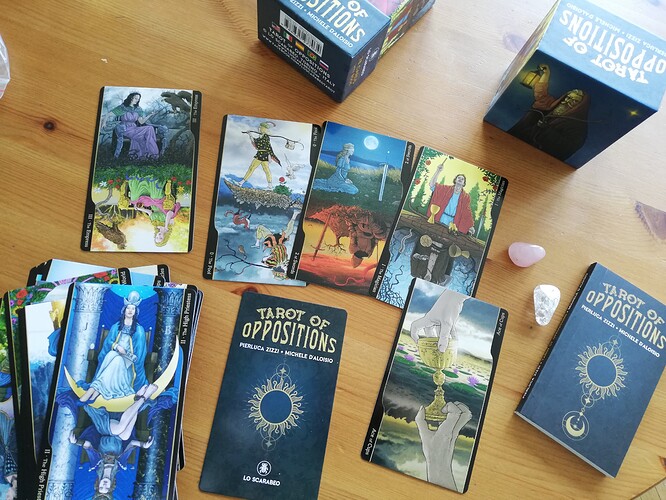 When using this deck, you have two options: first, you can use the deck in a similar way to most traditional decks. That is, you can read just the picture that appears on top of the card. It will either function as the “Upright” or “Reversed” identity of that card.

But with this deck, it actually opens up a new way of reading by encouraging you to read the entire card- not just the top or the bottom, but by seeing both parts as a conversation of the whole.

The reader is then tasked with finding where on the card best applies to the Querrant- the “positive” extreme, the “negative” extreme, or somewhere in the liminal space in between.

As such, the deck of oppositions isn’t so much as deck of opposites as it is a deck of extremes. The guidebook calls both sides of the card “positive” and “negative”, but not in a good/bad sense so much as like a battery 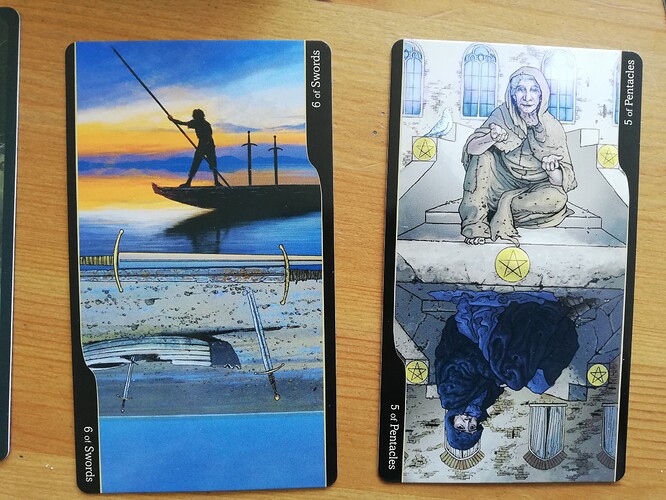 When it comes to good things, this deck has a lot- I’m really impressed with it! I love how it opens up new possibilities and conversations about the cards, all while still staying fairly true to traditional readings and holding on to key symbolism in the cards.

The art is really gorgeous- colorful and bright, and I am happy with the quality of the card stock. The size of the cards is on the larger side, but still manageable for shuffling

Also: the guidebook comes in multiple languages, so for anyone whom English isn’t their mother tongue, this is really helpful! 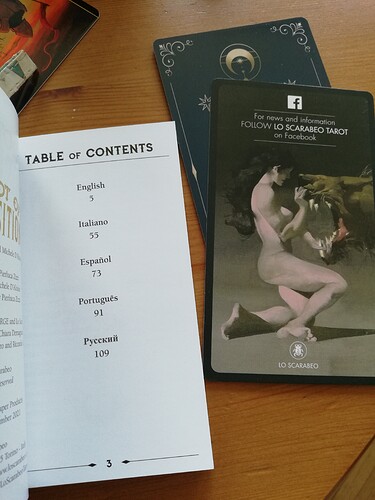 I bought the deck thinking it would help me with reversals, and while it does help with reversals in a sense, it actually opens up way more possibilities to read- considering upright, reversed, “positive”/“negative”, the liminal in between, and reading the card as a whole.

All in all, I can tell this deck is going to take a long time to master and is not a deck I would recommend for beginners to tarot.

Additionally, this deck uses a very unique way of reading, yet the guidebook only has two suggested spreads (one of which is not provided in English). I would think that, for such a special deck, it would include readings that make the most of the cards’ ability to be read in their entirety.

I gave it a go with a few practice readings and found that the deck has quite the personality. I would describe it as similar to talking with an enlightened person or prominent religious figure- the deck is very wise and knowledgeable, but sometimes speaks in riddles.

It does this not in a malicious way, but in a way that almost seems slightly teasing- as if challenging the reader to open up their mind and try to be able to understand. It really feels like it is encouraging me to see things from new perspectives.

All in all, an interesting deck- and I one I am excited (and a bit nervous!) to try to master!

Have you used the Tarot of Oppositions? If not, is it a deck you’d be interested in exploring?

Would love to hear your thoughts!

Omg !! I love this. I didnt understand what meant by two images as the box only showed one until i scrolled down and as soon as saw the actual cards omg got so excited. Thats awesome. Im very my a visual person so the fact tgat cards have the two versions in one image not just whether a card is drawn upside down it is actually pretty cool. Now im like omg i want to find this deck. Lol another aspect of my magical practice thats been pretty consistant is oracle and tarot cards. Love them.dont always get time to use them but omg love them. Dont always feel drawn to decks but this one looks awesome omg !! Love it even just relooking at the photos of cards got excited again​:joy:

im going to have to see if i can get this deck​:grin:thanks so much for sharing this. Dont often ger to see what a deck or the cards look like the box looks cool but it wasnt till saw the actual cards i was omg i want to find this deck​:joy:

. Thanks for sharing.hope you enjoy your new deck

Whoa. I like the idea of the whole picture being part of the process. That’s fascinating to me. I doubt I’m to the level where I could use it, but that art is wonderful!

I’ve had my eye on this deck for a while! Lo Scarabeo is the same company that published my Traditional Manga Tarot lol I love how interesting this deck is with the oppositions, the liminal spaces (and we know I love me some liminal spaces!), and the positive/negative aspects. I just might have to get it now!

Thank you for doing the review

Wow, @TheTravelWitch_Bry what a find. Yes, I must admit that this deck is way over my understanding of Tarot decks. Good luck and have fun understanding the meanings and readings of this deck.

Haven’t used Tarot of Oppositions yet. TBH, something I wasn’t aware of before this post. The imaginary, especially with the reversals, really like it, looks super useful. Haven’t come across much tbh providing imagines for the tarot cards reversal meanings.

@Phoenix_Fire Thank you so much, and I’m so glad you like the deck, Danni!

And cheers, I’m a very visual person too- I think this could be a great deck for someone who likes to see and feel the reading from the pictures in front of them! With most decks you have to inverse the picture (or go from memory) in order to read Reversals, which has always been challenging for me. I hope you’re able to find a copy for yourself!

). I’m glad you liked seeing the art- it is a pretty deck, the artist did a great job!

The outside box didn’t have much of a description, so when I opened it up and read that it involved reading the “in between” I was thrilled- now, if only I can master reading this third facet of the cards

You’re a very talented reader, Megan- I can see this deck opening up even more possitilbiites for you! I hope you’re able to get a copy if you decide to pursue it

@Debra2 Thank you so much, Debra- I appreciate it! It’s definitely a challenging deck, but (hopefully!) that will make it all the more rewarding to eventually master someday!

@Eliza_01 I agree- this is the first tarot deck I’ve ever come across that has picture representations for more than just the upright interpretations. That’s not to say there aren’t any (and perhaps this deck will lead the way to more in a similar style!)- if they’re out there, I’d love to see them too!

One quick note for everyone that came to me while I was studying the cards- this deck is not a good deck for elemental readings.

While the suit of cups does have lots of water

and the suit of pentacles has a lot of earth

, the suit of wands has no fire represented in the artwork- I would consider it in this deck to be more of a suit of wood

. The suit of swords has some cards with air/wind elements, but you really have to look for it, it’s much more of an earthen suit in my opinion.

I’m seeing a theme emerge here, as the Anima Mundi deck and Ostara Tarot deck also do not closely align with the elements of the suits- especially when it comes to fire. The only deck I currently use that stays fairly faithful to depicting the elements in the air is the Mystical Manga Tarot deck.

I’m starting to wonder if I’m just not drawn to decks that favor fire?

Which leads me to want to ask everyone this question about their tarot decks!

I was gifted this deck. I opened it up and went through it and decided I am not at THAT level of tarot yet. I am hoping to get there soon. Its such an interesting deck!

I’m actually starting to move away from tarot lately due to some memory issues and just not feeling connected to tarot anymore. I might pick up this deck just because it looks cool

I am officially in love with, intrigued by, & also intimidated by this deck. I would love to have it, but I don’t know that I am there yet either. However, I can’t over the artwork & imagery of the deck & everything about it. I am definitely going to have to keep this one at the top of my list.

I am hoping to get there soon. Its such an interesting deck!

I had the same feeling when I opened it up and realized it was way more than just the upright and reversed- this deck is loaded with potential and it can be really overwhelming to think about all the different aspects!

It is hard work, but it’s also turning out to be a pretty fun and curious deck too. I hope you reach the point where you feel ready to take on the Tarot of Oppositions, and I wish you all the best when the time is right for you to open it up again!

I might pick up this deck just because it looks cool

Nothing wrong at all with collecting decks for their aesthetic appeal- tarot decks certainly have collector-worthy artwork!

Sorry to hear it, you really are a very talented reader with the tarot! But it’s natural for hobbies to come and go in cycles, and sometimes it is time to move on to other things. If the spark ever returns and you feel drawn to tarot, I know you’ll be able to pick right back up where you were- you can always jump into it again in the future if it feels right!

I am officially in love with, intrigued by, & also intimidated by this deck.

It really causing a bit of a whirlwind of emotions, doesn’t it? It is a thrilling yet challenging deck for sure haha.

I hope you can get yourself a copy, @Siofra_Strega- and if you do, I hope you enjoy the deck!

A mysterious deck of polar opposites that teases you to see the whole picture? Count me in~

A mysterious deck of polar opposites that teases you to see the whole picture?

You summed up the deck so well with just one sentence- I think you’re already vibing with its energy, Celestia!

If you choose to get yourself a deck, I hope you enjoy it! Blessed be!