I’m in love with the Tarot! It’s one of the most beautiful things I’ve encountered since I started this path. Thank you for sharing that!

I got one quick question… I’m looking for a Tarot deck but I’m not sure a good place to buy one. Do you have any recommendations? I’m wondering if there’s anyone here that sells Tarot decks, I’d love to buy one from any of the coven members.

For this week’s challenge I was hoping to dig a little into my new book on the history of magic and witchcraft, referenced above. 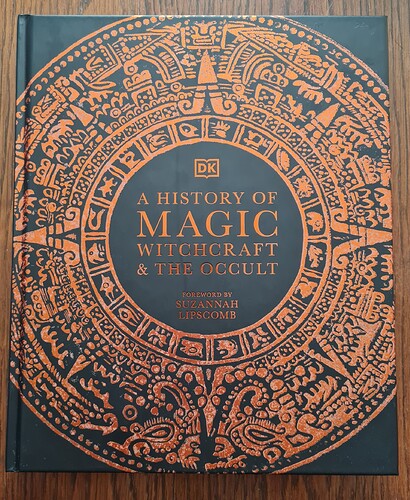 As it turns out, between a busy week at work and then heading to Ireland for my birthday for the weekend, I’ve not had much chance to do so.

Whilst in Ireland though, another opportunity presented itself. As I’ll be moving to Ireland early next year, I’m keen to learn more about the history of magick in Ireland.

We were staying in County Cork and whilst there visited Blarney Castle, home of the infamous Blarney Stone.

In the gardens at the castle there’s an area called “Rock Close”.

According to the guidebook:

The massive rock formations and the great boulders indicate that in pre-historic times it was was a Druidic settlement or place of worship. The druids were the priests of the old pagan religion which existed in Ireland before the coming of St Patrick in 432, and they worshipped the Sun God.

To be found walking around Rock Close are (amongst other things) 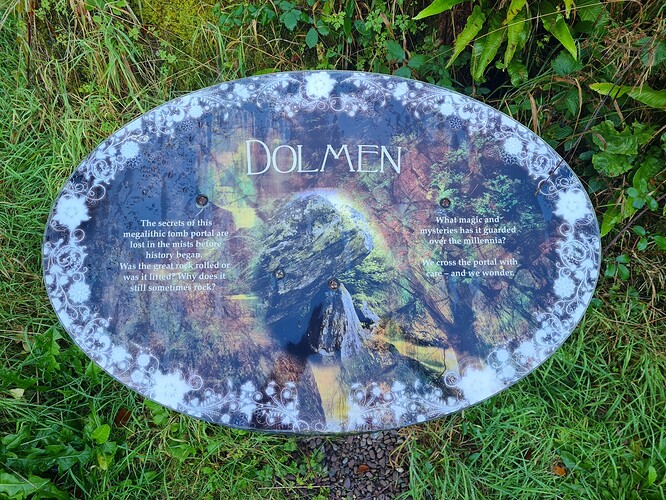 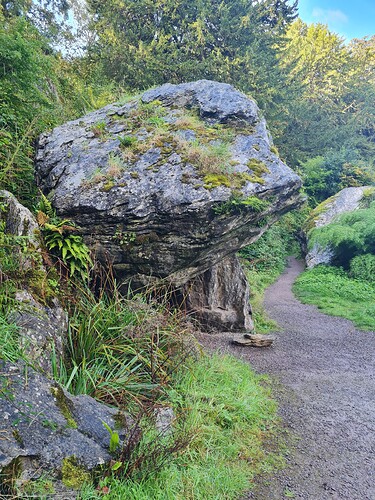 The Druid’s Altar and Stones 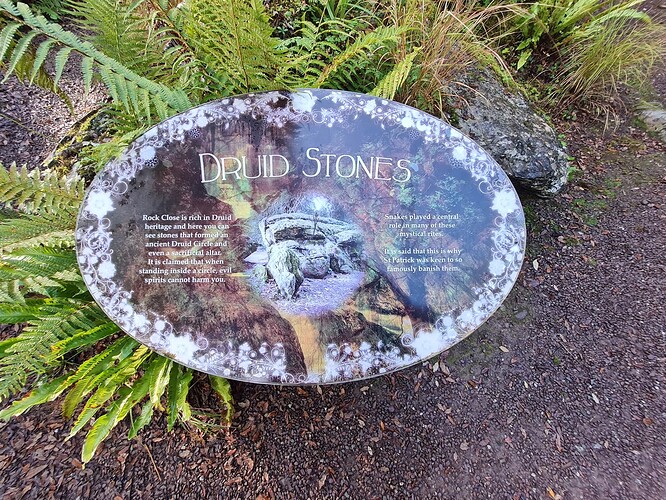 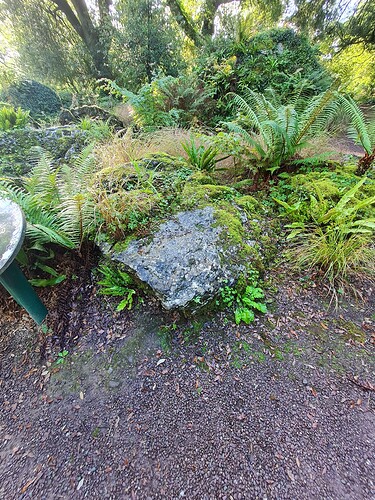 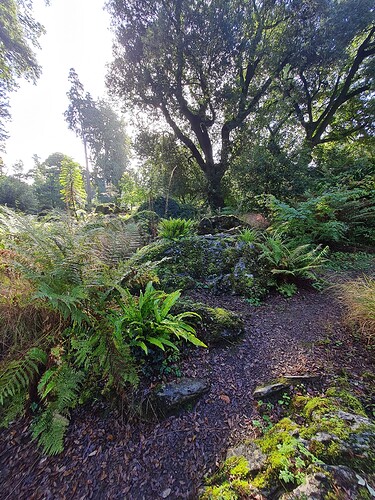 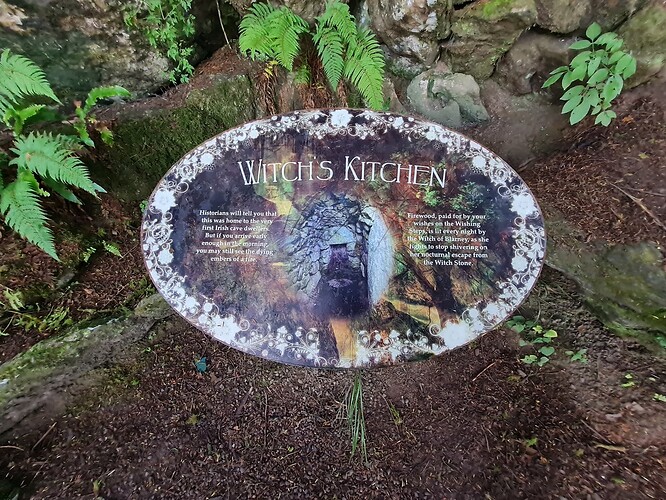 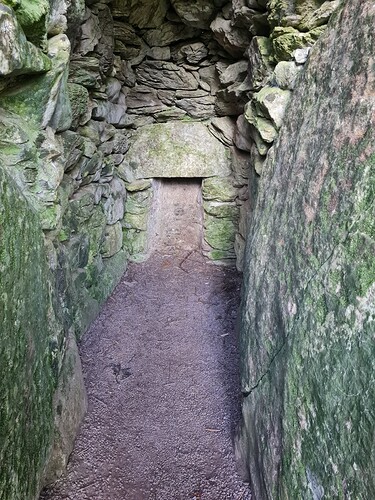 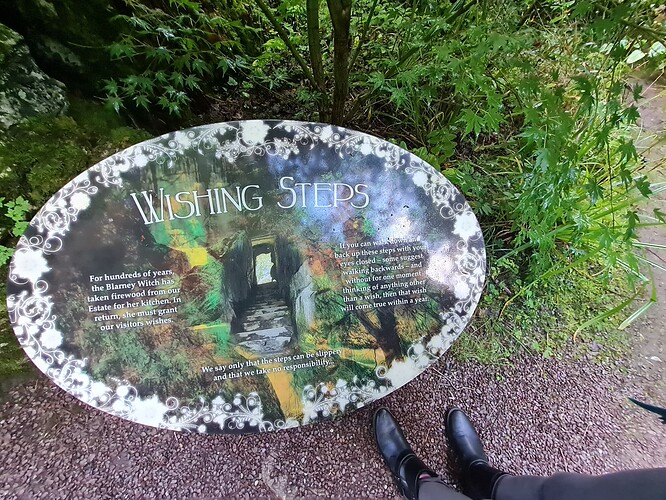 and the Witch Stone 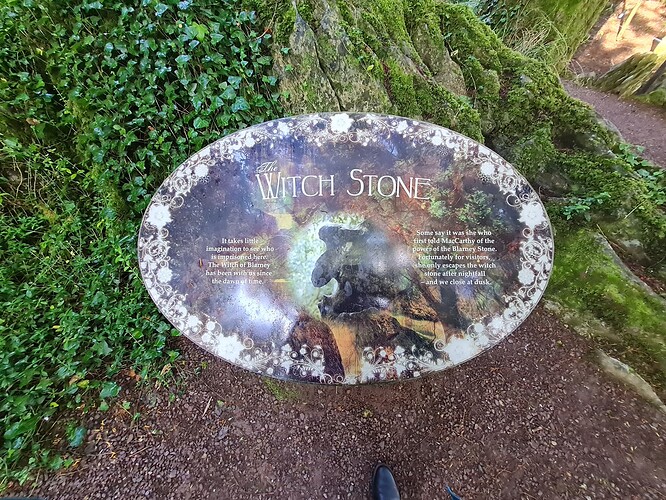 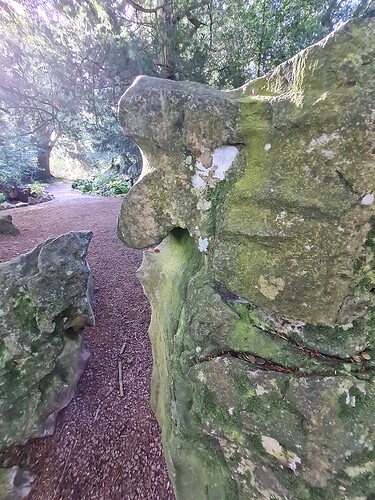 Most of the rocks stand as they have done for over two thousand years, though some amendments were made by the Jeffreys family in the eighteenth century.

There are ancient yew and ilex trees, with the Yew hanging over the Witch’s Kitchen having been assessed as being over a thousand years old. 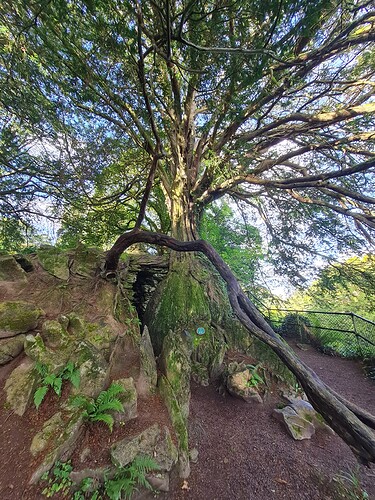 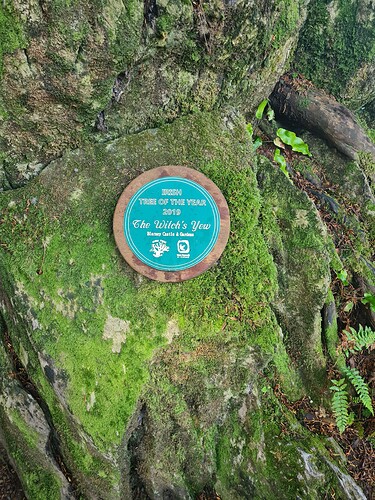 It’s an enchanting and magickal feeling place with a real sense of history, you can feel it in the air as you walk around. And even has it’s own fairy glade! 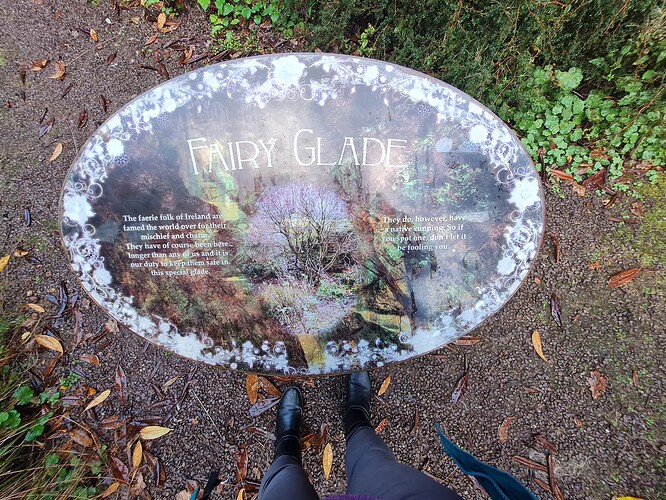 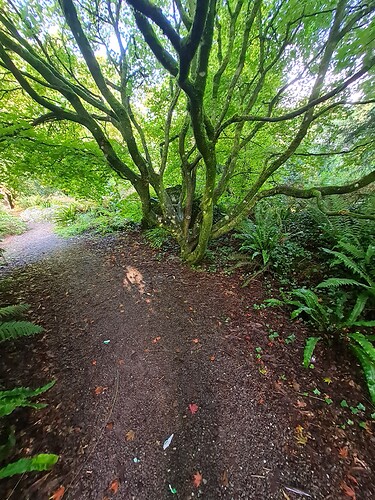 Leading on from this, I have had a quick opportunity to look in my book which has a short section on the druids and Celtic myth and magic.

My books says that historically Druids are likely to have been wise men, teachers, or priests, sometimes described as having magical powers.

According to Roman writer Pliny the Elder, druids saw magical powers in white-juiced mistletoe, which they thought brought fertility. Pliny also claimed that druids sacrificed animals; he described the killing of two white bulls as part of a druid ceremony for gathering mistletoe. Roman writers, including Pliny and Julius Caesar, are the sources of most accounts of druids, but similar stories appear in old Welsh and Irish tales, which had Celtic originals. From the 8th Century Christian scholars recorded these stories in manuscripts such as the 12th-century Book of Leinster and Book of the Dun Cow. Druids in such myths are sometimes magicians with power over storms or other natural phenomena. In one Christian tale, when St Patrick went to Ireland, a druid tried to discredit him by summoning a snowstorm, but Patrick dispersed it with the sign of the Cross.

Irish folklore, is full of myths and legends describing magical beings and gods, shapeshifting, and of course the infamous banshee. And Irish mythology includes a strong connection to other worlds including Tir na n’Og, the Land of Eternal Youth.

@IrisW those pics are beautiful

. Thank you for sharing them

I personally use Crystal Visions with my family and friends. I use Anima Mundi for myself and my SO. Note: I do intuitive readings instead of following the traditional Rider–Waite–Smith meanings.

My ex has the Kawaii Tarot. There is an Android App and an Apple App. It’s cute.

Great pics @IrisW Would love to visit Ireland someday, seems like there’s a so much magical history there.

Wow! That is very interesting, I’m glad you got to go to such magickal place.

Great pictures @IrisW! You must have had such a wonderful trip! Thanks for sharing!

Wow!!! Thank you for sharing, these pictures are just stunning. I really wish I could teleport there.

I hope I’m not too late. I’ve read all your comments and learned some much about our history, it’s very very interesting. So thank you all for sharing your wisdom.

I love museums so I’ve read about Museum of Witchcraft and Magic, I didn’t know about this place and it’s certainly interesting. Did you know that this year the museum is celebrating its 70th anniversary? I didn’t know that Gerald Gardner was involved in that museum as well.

Thanks again for this beautiful idea. It’s very important to know about our past and the lives of our ancestors.

Iris,
Beautiful Stones Iris, I love the earthy greenery the Druids had the enchanting lifestyle with the trees

and stones there so large and they must of took a lot of time to build those steps !
I just loved your pics you did an awsome job!
Thank you for sharing!
Perdos - Neat how Crowley was magical and made some one fall lol

he called it “action in a distance”
I wonder if it was really an accident?
Jeannie
Blessed be!

I really didn’t know that

Gerald Gardner was involved in that museum

He really did a lot didn’t he.
Thanks so much for sharing!
Blessed be!

Valen,
I enjoyed the video Drawing Down the Moon! She had a gift didn’t she!
Jeannie

@IrisW ~ Wow, your pictures made me feel as if I were there! Especially the one of The Wishing Steps! It looks so familiar to me! Maybe I was there in another life.

I have provided a link to my weey challenge here https://forum.spells8.com/t/history-of-magick-my-weekly-challenge/14733

If you’re talking about the one in Cornwall I’ve been there. Fascinating place

This challenge is now CLOSED

Thank you to everyone for peering into the past to explore witchy history this week!

A Props and Presents post will soon appear with shout-outs and prize details. Please keep an eye on the main page of the forums.

Note : This post will remain open for continued discussion for a few more days, but no additional prizes will be given after today.

Thanks for sharing the video about ancient magick, @pedros10! It’s going on the to-watch list, looks awesome!

@WhiteFox- while I don’t think any of the Coven Member Shops sell tarot decks (and I could be wrong!), I know @SacredBee has a beautiful deck they made, and you could consider supporting fellow witches through Tarot Kickstarter campaigns. There are also some lovely Tarot deck reviews posted in the Recommendations Category- take a peek! Good luck with your search

What an exciting place to discover on your trip, @IrisW!

The pictures are stunning- look at all that beautiful lush greenery

Thanks for sharing and hope you had a lovely trip- safe travels!

Is that the Museum of Witchcraft and Magic in England, @WhiteFox? A very fun place to research! And yes, lucky Iris has been there (I’m jealous!

) Glad you enjoyed it- and thanks for sharing!

Thanks again for your lovely exploration of the history of charms, amulets, and talismans in the other thread, @NickWick- great job!

@WhiteFox Hello! I have been searching and digging trying to learn and understand American Indian people’s beliefs and their ways. I have found very limited credible information and found that most documentation kept by the native peoples most likely burned with their villages. I am interested in any info that may be out there that I may not be aware of?? -much love

Thanks for the info! I’ll take a look for sure!

And yep, the museum in England. I really wanna go there too, haha

I really appreciate you interest in our culture!

I’m also investigating about it since it’s not easy for us either to know about our ancestors. There are many indigenous communities in Latin America, I’m starting to dig into those first, however, it seems that all of them had shamans, temples to our old gods, and rituals to worship nature.

You can start checking the Muiscas and Tayronas, those are some of our biggest communities that were formed way before the colonization.

Any other info I get I’ll send it your way. Hope that helps